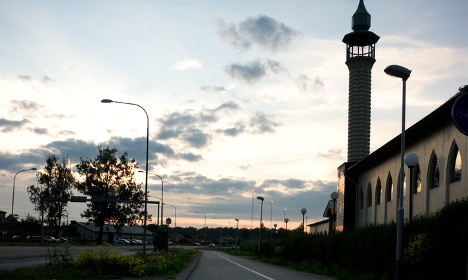 Uppsala mosque. Photo: TT
“Where are you from?” is a question I am commonly asked. The answer is that I am from Sweden. I was born here. I am 30 years old and my parents moved here from Morocco in the 1970s.
But here in Sweden, where several generations of immigrants have now settled, there still seems to be no problem with asking that question.
Many people who are born in Sweden and end up in higher education taking masters or PHD courses are still asked this.
I studied a Masters in political science at Stockholm University and I had this experience.
Many people with immigrant backgrounds in Sweden even feel compelled to say 'Syria' or 'India' if that is where their families are from, even if they have never lived there themselves. Being asked “where are you from?” is even worse than being asked “where is your family from?” in my opinion.
Compare this with the UK, where if you ask a British Muslim where they are from, they are much more likely to give you the name of their city – 'Birmingham' or 'Manchester'.
To me this speaks volumes about Sweden's integration policies. Politicians are always talking about how to help migrants integrate into society, but what needs to be addressed more is how to help society integrate with migrants. This is the responsibility of the whole society, not just immigrants. We need to think about how to value them. How to accept them. How to consider them 'Swedish'. It is not the responsibility of immigrants to fight the racist ideas and the negative preconceptions about them in society.
What we have a problem with here in Sweden is segregation. There is racism and it is still the case that people treat you differently if you are not blond.
As the Sweden Democrats continue to gain popularity, all the other political parties need to address this.
Immigration isn't debated much by the other parties. They all claim to value it and to want to maintain Sweden's policies on immigration. But they have also publically accepted that immigration costs Sweden money. By refusing to talk about the other benefits or problems, then in a way they are helping the Sweden Democrats. Cost becomes the key issue. Immigration is only discussed within certain parameters. But we need to stop discussing it on the Sweden Democrats' terms.
Looking at the bigger picture, while immigrants on low incomes may get help from the government if they can't afford to pay their rent for example, so well-off people can benefit from tax rebates or renting out their homes. Swedes can gain from 'the system' as much as immigrants. But this doesn't get talked about so much. We need a more fair debate where we talk about costs for our society generally – not just limiting dialogue to the issue of immigrants because that will just give more fuel to the racist rhetoric that exist in the migration debate.
There are also plenty of immigrants who are giving back to Sweden. Some came here and completed their studies and are now working at big Swedish companies, running their own businesses, teaching at universities or working in hospitals. Others may have smaller projects like driving their own taxis – providing an important service for Swedes. Men and women immigrants are doing well here. I meet these people every day. They are the parents of the school children I teach and the people I meet at the mosque.
But there also needs to be more discussion about why others are not doing so well. People coming from war-torn countries may need a lot of help and psychological support when they arrive and perhaps more could be done to achieve this.
If Sweden's mainstream political parties refuse to address these issues then immigration will continue to be discussed on the Sweden Democrats' terms and viewed as a costly burden for the country. Whereas it can bring plenty of benefits – for everyone living in Sweden.
Mohammed Amin Kharraki is a teacher and spokesperson for Sweden's Islamic Association