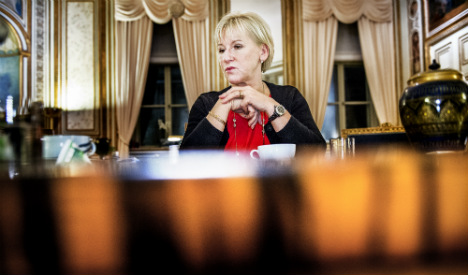 The third international conference on the humanitarian consequences of nuclear weapons has concluded in Vienna. A large delegation from the Government Offices and the Riksdag were there representing Sweden.

Our position is clear:

• In these unsettled times it is tremendously important to act vigorously to promote disarmament.

• The Government is now strengthening disarmament efforts across a broad front.

• Our line is clear: all nuclear weapons must be abolished.

A nuclear weapon explosion would have appalling humanitarian consequences. Next year, 70 years will have passed since a single nuclear weapon killed 90,000 people in Hiroshima and levelled the city with the ground.

Humanity must never forget this. The 2,000 nuclear tests that have taken place around the world have poisoned land and water for many years to come.

Last week one of the survivors of Hiroshima, Setsuko Thurlow, visited the Riksdag. She bore witness to the horrors of nuclear weapons.

And she described the after-effects that she and tens of thousands of others have to live with – for generations. She has made it her life’s work to spread the message: this must never happen again.

It is therefore welcome that more than 150 countries have now endorsed the international initiative focusing specially on the humanitarian consequences of nuclear weapons.

One of my first decisions as Minister for Foreign Affairs was that Sweden would also join the initiative. The reason was simple: nuclear weapons must never be used again.

The Government of Fredrik Reinfeldt put Sweden among the spectators and was unwilling to participate in these concrete efforts against nuclear weapons.

I found this line strange. We must work intensively towards this end, in new forums as well. I take this extremely seriously, as does the Swedish Government.

The Treaty on the Non-Proliferation of Nuclear Weapons is the cornerstone in anti-nuclear weapon efforts to prevent proliferation and achieve disarmament.

Next year’s Review Conference will be important and must address the challenges we are facing. More than 16,000 nuclear weapons remain to be decommissioned. That being so, it is particularly worrying that States are modernising their nuclear weapons.

It is high time to heed President Obama’s call in Prague and Berlin to reduce the role of nuclear weapons in defence doctrines and negotiate significant reductions in nuclear weapons arsenals.

I call on Russia to move forward on this together with the United States. We are particularly concerned about the presence in our vicinity of tactical ‘battlefield’ nuclear weapons and call on all States with such forces to withdraw and abolish them.

The Comprehensive Nuclear-Test-Ban Treaty must also be permitted to enter into force.

It is also important that North Korea dismantles its nuclear weapons programme and that a peaceful solution to the nuclear technology issue is reached with Iran.

India, Israel and Pakistan, which have not yet acceded to the Non-Proliferation Treaty, are called upon to join the Treaty as non-nuclear weapon states and, until then, to live up to the principles of the Treaty.

Disarmament and non-proliferation are a consistent theme of Sweden’s foreign policy and extend to other types of weapons as well.

The use of chemical weapons struck indiscriminately against civilians in Syria last year and regrettably has been continued this year by a number of chlorine attacks. This must end.

It is also important to make biological substances secure so as to prevent their use as weapons. Small and light weapons threaten and harm people every day.

The UN Arms Trade Treaty can help to control illegal trade. The Government is now moving to raise Sweden’s disarmament profile in a number of areas.

In the times we live in, it must be strongly emphasised that it would be horrific if decisions of life and death were delegated to machines. Continued discussions on autonomous weapons systems are therefore necessary.

These should be held within the framework of the international convention prohibiting or regulating conventional weapons that have serious humanitarian consequences.

Setsuko Thurlow talked about the great concern that she and other Hiroshima survivors feel: how the bomb – even today, nearly 70 years later – affects her children and grandchildren, future great-grandchildren and their children. It is the responsibility of humanity to ensure that the world gets rid of these diabolical weapons.