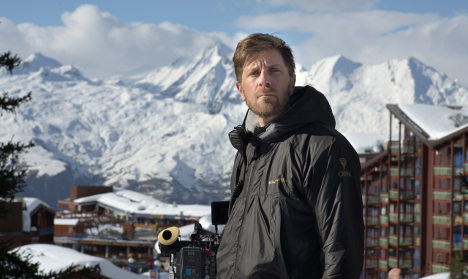 Swedish director Ruben Östlund on set. Photo: TT
The movie, written and directed by Ruben Östlund, has already won other global prizes including at the Cannes Film Festival.
The plot revolves around a Swedish family on holiday in the French Alps and how they deal with the very near disaster of an avalanche (see trailer below).
It has recently hit the big screen in the US to positive reviews. Entertainment Weekly went as far to compare the director to Swedish film legend Ingmar Bergman:
"It feels like a missing chapter from fellow Swede Ingmar Bergman's 1973 masterpiece of matrimonial atrophy, Scenes From a Marriage," the paper wrote.
Turist will be up against four other foreign films: Gett: The Trial of Viviane Amsalem, Ida, Leviathan, and Tangerine Manderin.
The prizes will be announced in Beverly Hills on January 11th next year.