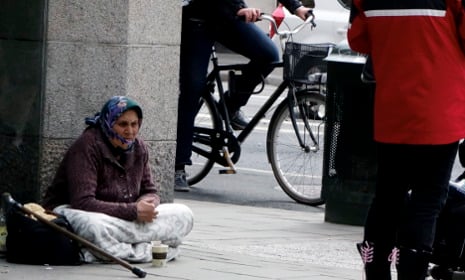 The woman in this picture is not the one mentioned in the story. Photo: TT

Stockholm City Court has charged a security guard for assaulting both a beggar and a passerby at the Rådmansgatan subway station in early December last year.

The guard was found guilty of assault, harassment, misconduct and unlawful detention after kicking the Roma woman's belongings as well as assaulting Bienvenido Flores, who came to her assistance.

Flores, who is a well-known lobbyist for the rights of EU migrants in Stockholm, filed a police report following the incident.

“It was an abuse of his power,” Flores told The Local on Friday. "And while we are happy that this case has gone to court, we felt that they dealt with it as just one individual behaving badly, whereas there is a larger, public, problem here."

"That a person in a position of public service would behave that way is not ok,” he added.

He said the case marked the first time the assault of a Roma person has led to a court sentence.

The Romanian migrant has been in Sweden for two years. Flores, who runs an organization that aims to protect beggars' rights, is a more familiar face, arriving in Sweden from Ecuador about 14 years ago.

The guard was sentenced on Friday morning to probation with community service and to pay damages of 5,000 kronor ($660) to the beggar and 10,000 kronor to Bienvenido.

But for Flores, the court sentence is a “small victory” after a long and tedious year-long process.

“The economic compensation is really not very important,” said Flores. “There are bigger issues amongst this migrant population that need to be addressed.”

A film captured by Flores, who was with the victim at the time to assist her with a medical appointment she had scheduled that day, depicts the assault. The video, which went viral last year, also served as evidence in court.

The case made headlines last year after the two guards tried to evict the Romanian woman from the metro station, claiming she could not sit and solicit money there. They kicked her belongings in the process. Flores said that she had complained to him about being harassed by the security guard previously.

When Flores intervened, one of the guards told him he was interfering with his job, and can then be seen pushing Flores in the apparent attempt to have him cease filming.

Following the incident, the guard was dismissed from his job at Trafikförvaltningen, which operates and manages Stockholm’s public transport system, while his colleague, the second guard who was on-site during the incident, received sanctions from his employers for not trying to stop the assault, but was not charged. He testified as a witness in court.

Trafikförvaltningen has previously said that while certain behaviour may warrant rejection from the subway, no laws were broken by the Romanian woman.