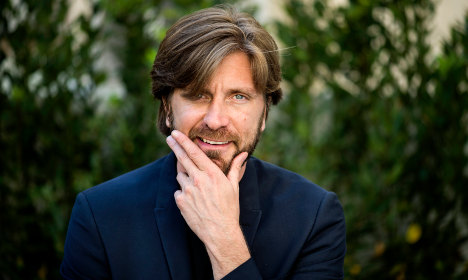 Swedish film director Ruben Östlund. Photo: TT
"I always had two goals when I was making Force Majeure," Ruben Östlund tells The Local.
"Firstly, I wanted to create the most spectacular avalanche in film history. Secondly, I wanted to increase the percentage of divorces in society."
Despite a lengthy chuckle, Östlund assures me that he's serious about the divorce bit.
But before we go any further – a bit of background on the film for those who haven't seen it. Turist, which has been released as "Force Majeure" abroad, follows a Swedish family's skiing holiday in the French Alps.
When an avalanche threatens to mow down the entire family, the father flees, leaving his wife and children behind to face certain death. When the dust settles and the family survives, the characters have to fight to understand whether their nuclear family is worth saving.
Östlund, who also wrote the film, says it's time the whole concept of a "nuclear family" is changed.
"We consider the concept of the nuclear family to be so strong, something that's totally fundamental. We don't see it from a historical perspective – and I really wanted this movie to provoke questions about this from the audience."
"The term wasn't even used until the sixties as families got smaller, as people moved into the cities, and as we cut ties with older generations," he continues.
"Look at Stockholm. A few years ago it was the city with the most single households in world. This goes hand in hand with economics, we're more efficient consumers here. If you have a family of four and buy a TV – that's a TV for four people. Someone that lives alone has one TV per person. We need to question the nuclear family and why we genuinely feel we should live our lives like this. Why should it be the best possible solution," he explains.
So does Östlund himself live alone?
"Yes I do, I'm the typical perfect consumer." Östlund on the set of Force Majeure. Photo: TT
Whether or not the film will result in more "perfect consumers", one thing is for sure – it's got people talking.
"I've heard of couples leaving the cinema and walking off in different directions," Östlund laughs. "Some reviewers have said this is a movie that people absolutely shouldn't see on a first date. In some ways I agree. But then again, it could be used as a relationship test instead of spending 20 years together and finding out then."
Thursday's Golden Globe nomination adds yet another string to the director's bow. The film has already won big at the Cannes Film Festival and was even nominated for Best Foreign Film at the Academy Awards.
While the accolades have been welcomed by the Swede, he says the most important thing is that the awards have allowed a more artistic film to share the stage with commercial films.
"The awards are really important from the beginning, especially those from the Cannes Film Festival, and now Hollywood is embracing it. That's new for me. I wasn't sure it was possible for a film like this to have an audience breakthrough considering the current movie industry and all its popcorn and coke. Now it's been sold to 68 countries."
And he thinks Swedish films in general should strive to follow suit. In fact, he believes that Sweden should avoid following Hollywood's lead altogether.
"When it comes to cinema, I like films that make me think and get me activated. I get bored if something doesn't raise any questions. You can tell that Hollywood movies are under economical pressure – they can't take risks on the content. People in Hollywood can lose their job if one of their movies isn't successful and it paralyzes them," he explains.
"We have to be careful of this in Scandinavia. We need to watch how we treat culture and how we create the culture we want to live in. We can't have the US as a role model – even though they dominate cinema in Scandinavia – we have to be careful we don't go the same way as they have. It's just not a very interesting path."
So, back to Östlund's original goals – the best avalanche and more divorces. Does he think he's succeeded?
"Well, there's not many avalanches made in film history, so perhaps we can say I succeeded there."
And the divorces?
"If someone tells me they got a divorce after watching Force Majeure then I'd say 'I hope you're happy now and that it was the right thing for you to do'. Me, I want to raise questions. I'm a provocateur – what can I say?"