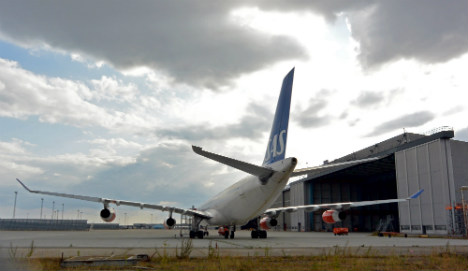 A passenger plane prepares to take off at Kastrup airport. Photo: Johan Nilsson/TT
The passenger plane nearly crashed into a foreign military aircraft after military air traffic control reported an "invisible" plane was circulating in the area.
"It's about a Russian military jet. We have identified it via Swedish combat pilots. There are no doubts about what kind of government aircraft it was," Defence Minister Peter Hultqvist told the TT news agency.
He added; "This is serious. It's inappropriate. It's downright dangerous."
Initial reports stated that the incident took place in the Swedish airspace but Hultqvist claimed this was not the case
"It was over international airspace. There has definitely not been a violation," added Hultqvist.
Swedish daily Dagens Nyheter (DN) reported on Saturday that the incident was a close call and happened shortly before 1pm. It's believed the military plane was flying near the skies of southern Sweden and had its transponder turned off – which makes it invisible to ordinary air traffic.
A Danish military spokesman told DN that at least one Russian military jet was seen flying in the airspace between the Danish island of Bornholm and the southern Swedish city of Malmö on Friday at around the same time that a commercial flight nearly collided with an unidentified military aircraft.
The passenger plane was taking off from Kastrup airport in Denmark at the same time when military air traffic control spotted the foreign aircraft.
"It could have ended really badly," said the Swedish Defence Air Forces chief Micael Bydén to Dagens Nyheter.
Upon discovery of foreign plane over Östersjön both the Swedish and Danish armed forces dispatched combat planes to identify it.
"Suddenly the military plane took a sharp turn and the way I understood it is that there was about a minute from being a collision course with a passenger plane," Daniel Josefsson, who works in combat management at the combat control centre in Luleå, told the newspaper.
After becoming aware of the foreign plane the military air traffic control centre gave a frantic message to their counterparts in civilian air traffic control.
"Our staff gave them a clear recommendation – 'do something, turn away' – the civil traffic controller then did that," added Micael Bydén to TT.
The situation is very similar to an incident in March this year when a Russian military plane nearly collided with an SAS plane.
"This incident in the spring was way too close, maybe 100 metres or less. In this instance we managed to avoid it getting that close," said Bydén.
In both of these incidents the aircrafts had their transponders switched off, making them invisible for civil air traffic. Bydén says it is "highly inappropriate" that such aircraft choose to fly in highly populated airspace.
"I would say it is among the most stupid things you could do," he said.
Jesper Duevang Rasmussen of the Danish Air Force told DN that Danish military jets “identified Russian military aircraft in the area” but did not comment on the type of plane or if there was more than one.
Speaking to Danish newspaper Berlingske, Rasmussen said that Denmark sent F-16s to meet and identify the aircraft. The Danish pilots reported that the spotted aircraft was Russian.
The Swedish military had earlier determined what type of plane was circulating and which country it belongs to but declined to go public with the information before the Defence Minister stated it was from Russia.
The Local/pr