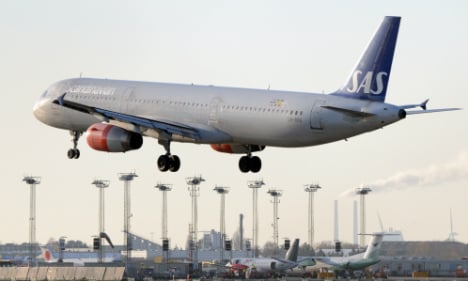 After initially denying an SAS plane was involved in the incident, a spokesperson for the company confirmed to Swedish news agency TT that it was an aircraft belonging to the airline.

"In this particular case, no security boundary has been broken," Knut Morten Johansen, Norwegian Communications Manager at SAS, told TT.

He added: "It is therefore important for SAS to say that nobody has been put in danger, both the pilot and traffic management have had control of the situation."

Johansen added that he was unaware how far apart the passenger aircraft and the military plane were to each other, but said that they were never closer than 3,000 feet (900 metres) apart.

Information obtained by Sweden's Dagens Nyheter (DN) on Sunday first indicated that the dramas involved SAS flight SK1755, which was on its way to Poznan in Poland.

The newspaper analysed radio traffic between Sweden's military air traffic control and the pilot. It stated that the plane, which had departed from Kastrup airport in Copenhagen, was given clearance to climb to 25,000 feet, only to be told three minutes later to stop the climb at 22,000 feet.

"Our staff gave them a clear recommendation – 'do something, turn away'. The civil traffic controller then did that," Swedish Defence Air Forces chief Micael Bydén told the newspaper.

Sweden's Minister for Defence said that the incident, which occurred just out of Swedish airspace to the south of the country, was "serious, inappropriate and downright dangerous."

Hultqvist said the Russian plane had been flying without a transponder – an electronic identification device that would have made it visible on the radar of the commercial plane.

"There is a risk that accidents could occur that could ultimately lead to deaths," Hultqvist added.

In March this year, a separate accident was even closer to happening, when a plane from Scandinavian Airlines came within 100 metres (330 feet) of a Russian aircraft.

On Sunday, Poland's defence minister, Tomasz Siemoniak, warned that in recent days there had been "unprecedented Russian activity from its Baltic fleet to flights over the Baltic Sea", and on Friday his counterpart in Estonia said a Russian plane had also violated its airspace.