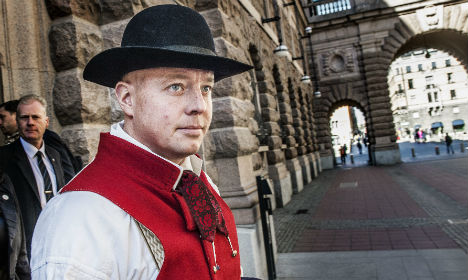 "It would be good with a repatriation grant," Björn Söder said in a lengthy interview with Dagens Nyheter.

When asked specifically if migrants in the southern city of Malmö should be given money to return home he stated that he was not against the idea.

"Yes, and that is good. We must make it easier for those considering moving back to their own country. Then we'll be in a better condition to create a society of common identity."

Elsewhere in the interview Söder mentioned Jews, Kurds and Sami people as examples of groups that may have Swedish citizenship but ,in his view, can't be considered true Swedes if they don't "assimilate" into Swedish society.

"We are for an inclusive society where everybody who wants to can fit in. We have an open Swedishness which also includes people with foreign roots. But you have to adapt to the Swedish and assimilate in order to become Swedish," said Söder.

He added; "I think that most people with Jewish origin who have become Swedes leave their Jewish identity behind. But if they don't it doesn't have to be an issue.

"You have to differentiate between citizenship and national affiliation. They can still be Swedish citizens and live in Sweden. Sami and Jews have lived in Sweden for a long time," he said.

His remarks have not gone down well with the chairperson of the Swedish committee against anti-Semitism, Willy Silberstein.

"I am Jewish and born in Sweden. I am just as much Swedish as Björn Söder. There is an us and them mentality which I think is a characteristic of the party.

"We should remember that the Sweden Democrats come from Nazi organizations."

After the Sweden Democrats became the third largest party in the country during last September's election, Söder was named as the second deputy speaker in the Swedish parliament. He has yet to respond to the criticism of his remarks in the newspaper interview.

His comments fall on the same day as another Sweden Democrat, Tommy Hansson of Södertälje, drew attention to a blog post he wrote in 2009, in which he stated that he defended waterboarding being used as a means to get information from terrorists.