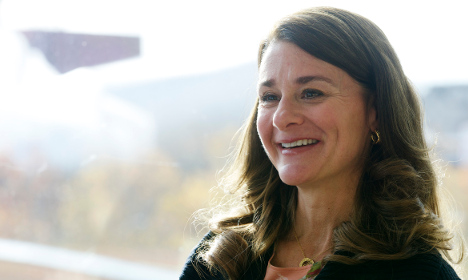 Melinda Gates talks to The Local. Photo: TT
Melinda Gates, the wife of Bill Gates and the co-founder of the Bill & Melinda Gates Foundation, is an incredibly busy woman. When she's not travelling the world helping the disadvantaged, she works with her poverty-fighting foundation, to which she and her husband have donated around $30 billion.
But found the time to talk to The Local, starting the conversation with an insight into her love for Sweden.
"It's not just the friendly and open people and the beautiful sights that keep us coming back," she explains.
"It's the unique combination of generosity and innovation that elevates Sweden to its standing as a world leader in saving lives and improving conditions for the world’s poorest. It's this kind of leadership and legacy of compassion and action that inspires us in our work every day."

Melinda Gates speaking for the World Health Organization. Photo: TT
Indeed, the American's foundation works particularly closely with Sweden when it comes to developmental aid.
"Our foundation has a great relationship with Sweden. One of the most important goals we share is investing in global health, particularly the health of mothers and children globally. That focus is paying off. In the past two decades, infant and maternal mortality have decreased by one-third. These statistics translate into literally tens of millions of human lives saved, and for millions more, the opportunity to lead a healthy, productive life.
"One of the most effective solutions we work on together is something called Gavi, the Vaccine Alliance. Its goal is to make sure that the children in the poorest countries get the same life-saving vaccines that children get in Sweden and the U.S. Melinda's husband Bill, the co-founder of Microsoft. Photo: TT
Read Natalia's full interview
"For 2014, Sweden is contributing 450 million kronor to Gavi. Between 2011 and 2015, Sweden’s funding will pay for vaccines to immunize about 11.8 million children and avert 190,000 deaths. The people of Sweden should be very proud of the part they’ve played in saving children’s lives and setting them up for prosperous futures."
She explains that another key area that the foundation and Sweden work together on is family planning.
"Sweden is involved with a public-private sector partnership that is working to make long-acting, reversible contraceptive implants available to millions of women in the world’s poorest countries. These implants are being provided by manufacturers at more than 50 percent discount. This will contribute to better maternal, newborn, and child health, and also help fight poverty and enable more adolescent girls to stay in school," she explains.
Another important topic for Gates is the empowerment of women. She confesses that she was thrilled when Malala Yousafzai recently became the youngest person ever to receive the Nobel Peace Prize at age 17.
"It’s such a well-deserved honor. Her absolutely incredible courage in speaking up for herself and for girls like her who are being denied an education is helping to spark a movement with the potential to lift up millions of lives. Malala is an important example of how young people – especially young women – can be powerful agents of change.
For all the young people who wonder whether their voice can make a difference, the answer is yes!
Now it’s up to us to put words into action by ensuring that, wherever they are born, women and girls are empowered with the best possible opportunities to create their own future. As Malala has made the case so eloquently, quality education is crucial to that – and part of what must come next is a new focus on closing the persistent gap in secondary education between boys and girls."