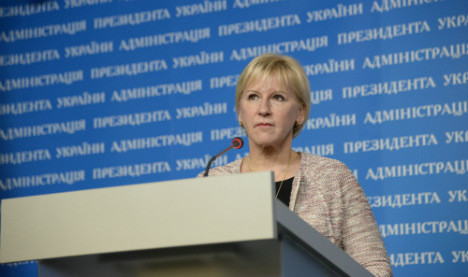 Wallström requested the meeting with Lieberman in connection with plans to visit Israel to attend a memorial service for Raoul Wallenberg, the Swedish diplomat credited with saving thousands of Jewish lives during the Holocaust, according to a report in the Expressen daily.

Sweden and Israel have been at odds since the new Social Democrat-led government in Stockholm officially decided to recognize Palestine shortly after the election in September and the decision is an indication that relations remain strained, despite the return of Israel's ambassador to Stockholm in November.

According to Israeli broadcaster TV2 Wallström followed praxis by requesting a meeting with Foreign Minister Lieberman but has received the brush off from Tel Aviv.

Margot Wallström's press secretary Erik Bohman confirmed to The Local that they were aware of the stories circulating in the Israeli media but was unable to comment further.

"I don't have that information," Bohman said.

Bohman was furthermore unable to confirm whether the reports would affect Margot Wallström's plans to visit Israel.

Avigdor Lieberman roundly criticized the Swedish decision to recognize Palestine as a state.

"The decision of the Swedish government to recognise a Palestinian state is a deplorable decision which only strengthens extremist elements and Palestinian rejectionism," Lieberman said in October.

The decision also courted criticism from opposition parties in Sweden but the Moderate Party's leading MEP Gunnar Hökmark confirmed in a blog post on Wednesday that he had backed a European Parliament resolution on the matter. The resolution "supports in principle recognition of Palestinian statehood and the two state solution" although Hökmark pointed that the parliament's decision is within the framework of a peace process "with the recognition of Israel as a starting point".

"In contrast with the Swedish government's unilateral and unconditional recognition of a Palestinian state," he wrote.