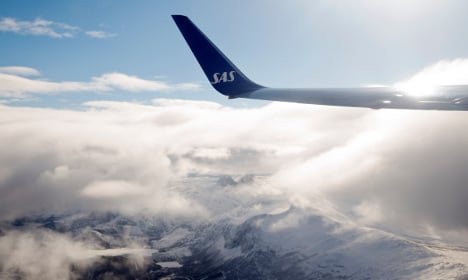 SAS profits took a dive in the fourth quarter. Photo: TT
The company posted a net loss of 303 million kronor ($39.4 million) from August to October compared to a profit of 1.47 billion in the same period last year.
Sales fell slightly to 10.97 billion kronor from 11.06 billion in the same period last year, when two months included revenue from a former subsidiary, as cheaper tickets cut into margins with a 3.1 percent drop in the average earning per passenger.
"SAS has delivered the promised efficiency measures, with declining unit costs as a consequence," SAS chief executive Rickard Gustafson said in a
statement, adding however that "earnings were impacted by intense competition and strong price pressure."
The airline increased its passenger numbers by 8.4 percent and succeeded in lifting its load factor — which measures how full planes are — by 2.3 percent.
SAS has come under increasing pressure in recent years from low-cost rivals including Ryanair and Oslo-based Norwegian, Europe's third-largest budget airline.
The company announced a "final call" recovery plan in November 2012 which has included job cuts, salary reductions and administrative cutbacks.
Further savings worth 2.1 billion kronor would be put in place by 2017 to meet "changing competitive conditions for European aviation" chief executive Rickard Gustafson said.
SAS, which is 50-percent owned by the Swedish, Danish and Norwegian states said it has the "potential" to report a pre-tax profit for the 2014-2015 fiscal year "provided that the economy does not weaken", and that there is no change in falling jet fuel prices or other unexpected events.

TRAVEL NEWS
BREAKING: SAS pilots in Norway, Sweden and Denmark to strike after talks break down