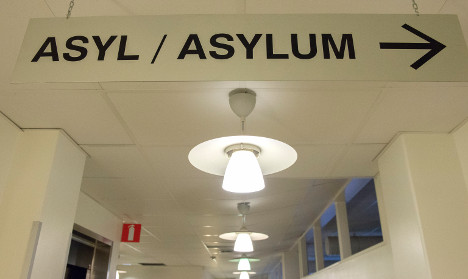 The inside of a Migration Board office near Stockholm. Photo: TT
The authority has estimated that 80,000 people will have sought asylum in Sweden before the year is over, most of them coming from Syria, Afghanistan, Somalia, and Eritrea.
The influx marks the most refugees to arrive in Sweden since 1992 during the Yugoslav wars, when 84,000 people came seeking a new life.
Employees at the Swedish Migration Board haven't been able to cope with the workload.
"Many of the workers are stressed and are feeling a little worn out," said Jörgen Broman of the Saco trade union confederation told the Dagens Nyheter (DN) newspaper.
He said that at its worst, workers in Malmö dealt with around 2,500 cases in one week alone.
"Now we're down to around 1,400-1,500, but it's still a struggle. The hardest part is making sure people have food and a roof over their head," he explained.
He added that staff members had no choice but to work until 9pm and even on Saturdays.
The board, which currently employs around 5,000 people, plans to recruit new workers within administration and for dealing with asylum and residence permits.
Migration Board spokesman Fredrik Bengtsson acknowledged the need to alleviate stress and overworking.
"We're aware of it. Sweden is one of the countries that take in the most asylum seekers in Europe, after Germany. To meet this demand we have to work more than work five-day weeks. We're trying to even out the work load through a new and more flexible roster," he told DN.
With the average cost of employing a new worker around 600,000 kronor ($78,400), the move is expected to cost the board around 600 million kronor.
The board estimates that 95,000 people will seek asylum in Sweden next year.