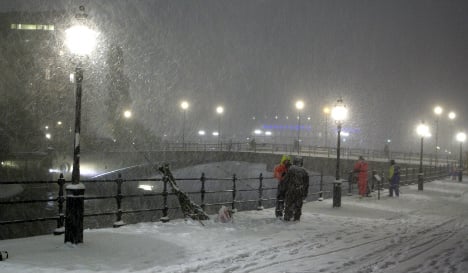 There is little chance of snow in Stockholm this Christmas. File photo: TT

But those who already have a little of the magical white stuff on the ground around their homes can be fairly certain that it will stick around over the festive period.

The snow-line currently stretches just south of Gävle in central Sweden across to the northern parts of Värmland. Although many areas north of this line have only a thin sprinkling of snow.

"Generally speaking the colder weather will arrive on Christmas Eve. It'll be fairly clear with only small amounts of precipitation if at all," said Lovisa Andersson at SMHI.

"This is due to the fact that the front of precipitation will pull in over the highland areas," Andersson said.

Large parts of Svealand and the whole of Norrland can expect below zero temperatures on Christmas Eve and only in the far south will the thermometer creep above freezing.

"The chances of a white Christmas in the south are therefore very slight. In northern Värmland, Dalarna and even further north the snow will remain. And more looks to be on the way in the beginning of next week. The forecast for Christmas Day has fluctuated a lot recently."

A low pressure front pushing in from the western could affect what is expected to be a period of cold, clear and dry weather and bring with it some unstable weather, Andersson explained.