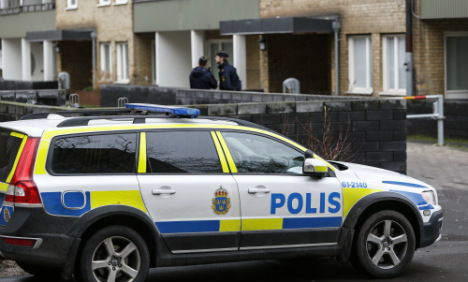 Photo: TT
Rosengård residents woke on Sunday to a blast for the second night running.
"The property owner has its operations in the affected premises," said Kim Hild of the Skåne police.
The two explosions hit the same building.
"But this time the plastic explosive was placed on a different side of the house," said Magnus Lefèvre of the Skåne police, which has formed a team to investigate the incidents.
A further bombing occurred at Thomsons Väg – a few hundred meters away – where a car was left destroyed.
No one is reported to have been injured in the explosions although the window of a nearby apartment was shattered by the blast and debris. The office building was also damaged in several places.
Residents of several flats in the vicinity reported that their buildings shook as a result of the blasts. Police have began conducting interviews in the area but as yet have no suspects.
In a further incident a suspicious package was investigated on Sunday after police cordoned off an area near the city's inner ring road. The package turned out to be a false alarm.
"Considering all the events we are being extra vigilant in the area," said Kim Hild.