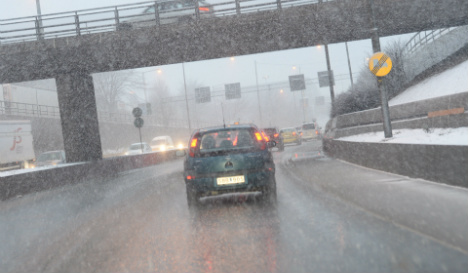 Photo: TT
A recent bout of clear skies and cold temperatures has left roads in much of the country treacherously icy, the agency has warned.
"It (the temperature) can fluctuate a great deal, especially in the southern parts of the country," said Lovisa Andersson at SMHI.
According to the Transport Administration (Tafiikverket) forecast on Monday, roads are slippery in central areas of the country. During the day the belt of ice is expected to push both north and south.
Rain and snow fell in southern and northern areas during the night and while temperatures have risen above freezing in some areas, they remain below zero in Svealand.
Snowfalls are expected to continue during the day in areas of Västernorrland, Jämtland and Västerbotten. SMHI has not issued any weather warnings as a result of the snowfalls.
The west coast is set to enjoy milder weather with temperatures a few degrees above zero and some showers expected during the day.
"Worth bearing in mind is that if the skies are clear and the weather is cold then temperatures can fall very fast," Lovisa Andersson said.
"Generally speaking it looks like we are heading into a period of colder weather," she added.