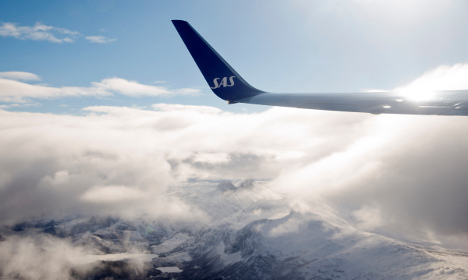 Photo: TT
Who needs a white Swedish Christmas?
Not the Swedes, it seems.
Swedavia, which runs ten airports across the country, said on Monday that there has been a noticeable increase in the number of flights booked and taken over the holiday period compared to that in 2013.
While exact figures won't be available until the new year, Swedavia spokesman Klas Nilsson said there will be "several percent more" this year – meaning an additional 200,000-300,000 trips – when compared to the last festive season.
"People are prioritizing travel, experiences, and time over the Christmas presents like flat TVs," he told the TT news agency. Christmas shoppers in Stockholm on Monday. Photo: The Local
For those who chose to stay in Sweden for the break, a white Christmas is unlikely. National weather agency SMHI said that those living in the south of Sweden better not get their hopes up, adding, however, that a cold snap is likely to hit on Christmas Eve.
On Monday, however, the agency suggested that Stockholmers could expect sleet on Wednesday, and temperatures as low as -5C on Christmas day.
Gothenburgers can expect temperatures to drop to -3C over the holiday, but the sun is predicted to be shining. Christmas Day in Malmö will reach a sunny top of 4C.