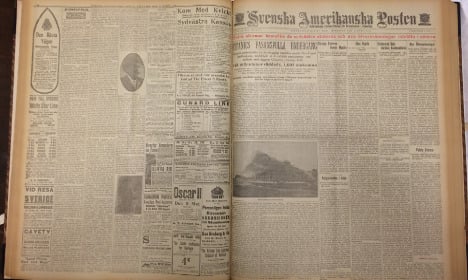 Some 1.3 million Swedes left Europe for the promise of North America and many of them settled in the mid-west. The immigrants established communities, churches and societies and more than 600 Swedish-language newspapers were published in the United States in the 19th and early 20th centuries.

"These newspapers were extremely important to the Swedish-American community," Bruce Karstadt, president and CEO of the American Swedish Institute, told The Local.

"They provided them with news from Sweden, and news from other immigrant communities in North America. They helped them learn about American society in many dimensions — from how to cook unfamiliar vegetables to the responsibilities of being a citizen in the US."

This wealth of historical record has previously only existed in paper form and thus required a visit to the US and/or Sweden.

An international partnership involving the National Swedish Library in Stockholm, the American Swedish Institute, the Minnesota Historical Society, and the Swenson Swedish Immigration has addressed the matter and is working to develop a digital database of some of the material.

"This project began in 2008 in some informal conversations among myself, representatives of the Minnesota Historical Society, and Dag Blanck at Augustana College in Rock Island, IL. We knew that people would be interested in having better access to these newspapers, and now seemed to be a good time to take advantage of new emerging digital technology," Karstadt explained.

The American Swedish Institute is housed in a mansion in downtown Minneapolis which was bequeathed by Swan Turnblad, the owner and publisher of the Svenska Amerikanska Posten (The Swedish American Post), one of the most popular newspapers of the era and which closed in 1940. The Swedish-language newspapers served a two-fold purpose, providing news from the homeland and also information about US society as well as general interest features and stories.

"They also documented much of the development of the Swedish-American society and offered insights into how the Swedish American community developed, socially, culturally, politically, educationally and religiously," Karstadt said.

"Some of the newspapers were published by religious groups and thus were important to promoting the interests of the denomination, whether Lutheran, or Methodist or other. Some were secular or advocated particular social issues, such as the temperance newspapers that were anti-alcohol."

The Swedish National Library in Stockholm is tasked with preserving a copy of virtually everything published in the Swedish language. The library's records date back to 1661 and its archives have provided some two dozen Swedish-American newspapers, according to the Star Tribune.

The trans-Atlantic partnership began in 2008 and it is hoped that the archive will go online by late 2015.

"The database is scheduled for launch in 2015 and will be made open to genealogists, ancestors and scholars. There are also plans to offer the newspapers in a translatable form to enable non-Swedish speakers to decipher the text."

Bruce Karstadt told The Local he hopes that the general public will be given access to the database from late 2016.