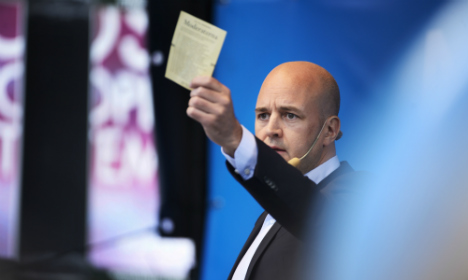 Confidence in sitting prime minister Stefan Löfven has meanwhile dropped once more, with 42 percent of Swedes supporting the Social Democrat leader, according to the survey by Ipsos/Dagens Nyheter. Some 45 percent expressed confidence in him in the previous survey in November.

Centre Party leader Annie Lööf, considered by many to have taken on the roll of de facto Alliance opposition leader since Reinfeldt's resignation, continued to enjoy a rise in support, claiming some 36 percent (33 percent in November).

The new Moderate Party leader-elect Anna Kinberg Batra received the backing of 33 percent. This is the first time she has featured in the survey and is reported to be in line with the figures Reinfeldt enjoyed when he took over as party leader.

Jan Björklund of the Liberal Party has seen a boost in popularity to 32 percent (28) with the Green Party's Gustaf Fridolin down at 33 percent (36) and Christian Democrat leader Göran Hägglund up to 31 percent (28).

The Left Party's Jonas Sjöstedt came in at 26 percent, the only red-green party leader enjoying a boost in the December poll.

The Green Party's Åsa Romson continued to struggle, dipping 4 percentage points to 18 and was trailed only by the Sweden Democrats' Jimmie Åkesson, who was unchanged at 17 percent. Only nine percent expressed support for Åkesson's temporary replacement Mattias Karlsson.

The DN/Ipsos survey canvassed the opinions of 1,436 people between December 8th and 15th and the figures represent the proportion who responded that they had high or very high confidence in the respective Swedish party leaders.