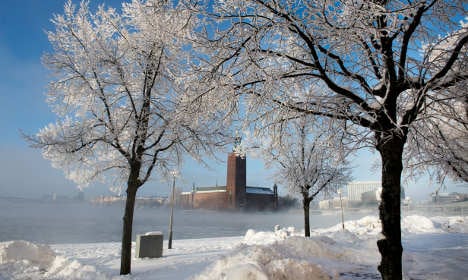 Stockholm in the snow last year. Photo: TT
"There'll be plenty of snow during the evening on the night before Christmas," Sofia Söderberg at weather agency SMHI told the Dagens Nyheter newspaper.
"And we're expecting sub-zero temperatures on Christmas day, so the chances of a snow-covered city are good."

Tourists enjoy the snow in Stockholm in 2013. Photo: TT
She added that people living further south hoping for a similar wintry outcome may however be disappointed.
"A cold wind will sweep through eastern Svealand and northern Götaland," she said, adding that there was only a "small chance of snowflakes" in Sweden's southern reaches.
Norrland residents can meanwhile be sure of enjoying a white Christmas, where much of the area is already covered in the fluffy white stuff.
Söderberg was quick to urge motorists to be careful on the roads, explaining that rapidly dropping temperatures can leave ice under the snow on the roads and motorways. A winter day on the Stockholm island of Djurgården last year. Photo: TT
Wondering what the weather looks like in your corner of Sweden? Check out The Local's weather page