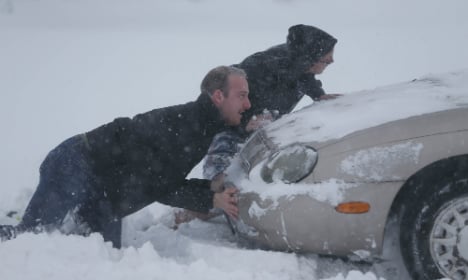 File photo: TT
Hard winds and heavy snow will hit both Uppsala county and Västernorrland on Christmas Eve carrying with it the risk of snow drifts. The coast of Uppland could be in line for some 10 centimetres of the white fluffy stuff.
"There is a snow area over Västernorrland, which will move south during the day and into Uppland. It could lead to tricky road conditions with some local areas of ice,"  said Alexandra Ohlsson, meteorologist at SMHI.
Three class 1 warnings (on an ascending scale of three) have been issued in Västernorrland, Uppsala and Stockholm.
But despite the snowy weather it appears that only those in Norrland will get to enjoy a "real" Christmas with cold temperatures and enough snow to build snowmen in the garden. Further south the day is expected to serve up a dish of rain with the mercury remaining above zero.
"The snow line is currently a bit north of Lake Vänern and then up towards Värmland and Gastrikland. It's a little uncertain if more will get snow during the day, above all, it is uncertain how much will settle," said Alexandra Ohlsson.
All those celebrating Christmas in northern Norrland can however expect temperatures of minus 15-20 with plenty of snow promised along the Swedish highland areas – a welcome respite for the tourism industry whose snow production has been hampered by a warm December.
Wondering what the weather looks like in your corner of Sweden? Check out The Local's weather page