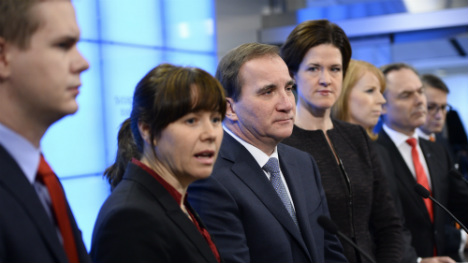 "Those of us here are prepared to take responsibility for how Sweden is to be governed. We have had constructive talks in the last few days," Prime Minister Löfven told reporters at a press conference in Stockholm on Saturday morning.

Löfven made the comments flanked by the leaders of the Alliance which is made up of the Moderate Party – which led the previous coalition government under Fredrik Reinfeldt – the Centre Party, the Liberal Party and the Christian Democrats. Also present were the co-leaders of the Green Party, which is currently in coalition with Löfven's centre-left Social Democrats.

The Prime Minister called the new deal the "December agreement" and said its goal was to ensure that a minority government could govern Sweden, without the need for the snap election in March 2015, an option he announced following a budget crisis earlier this month.

Neither the Left Party nor the nationalist Sweden Democrats were present at the conference.

"With this agreement, the government will not be making any decision about an extra election, it is simply not of immediate interest," said Löfven.

The deal, which will last until 2022, means that the Alliance will not vote for its own alternative budget in future votes if this threatens the elected government's budget from getting passed.

The idea is to prevent the crisis that happened earlier this month when the Alliance's opposition budget got more votes than Löfven's coalition proposal, because it was also backed by the nationalist Sweden Democrats, who hold the balance of power in parliament. The Sweden Democrats made the move in protest at the coalition's liberal immigration policies.

Between now and the next annual budget vote in autumn 2015, the Social Democrat-Green minority coalition government will follow the Alliance's centre-right budget.

The major parties have also agreed to discuss further changes to immigration policy, defence and pensions.

"It's the politics which should be in focus, not questions of its form, and this agreement makes this possible," said Christian Democrat leader Göran Hägglund.

The Sweden Democrats, who had said they wanted to turn the now-cancelled election into a referendum on immigration, reacted with anger and disappointment to the news of the surprise deal between the centre-right and centre-left parties.

Anna Kinberg Batra, the temporary leader of the Moderates who is expected to take over from Fredrik Reinfeldt, welcomed the arrangement.

"The agreement strengthens Sweden and it is something we in the Alliance welcome and have sought for quite some time," she said.

Meanwhile Annie Lööf of the Centre Party was equally emphatic about the deal, which was formed behind the scenes during the Christmas period.

"Since the 1970s we have had minority governments except for eight years. This allows us to show a need to agree on how the country can be governed with stability and efficiency across any bloc borders."

Löfven said he had no regrets about announcing a snap election a few weeks earlier.

"No, as that was based on the conditions that prevailed at the time," he said.

"Basically, the idea is to not allow the Sweden Democrats to have any influence," Camilla Sandström, a political scientist at the University of Umeå in northern Sweden told the AFP news agency.
"It illustrates a common feature of Swedish politics – you look for long-term solutions."
The snap poll had been scheduled to take place on March 22nd. If it had gone ahead, it would have been the first early election in Sweden since 1958.
"Sweden has a proud tradition for solving difficult problems across party boundaries, a tradition which doesn't exist in any other country," Löfven told reporters on Saturday.
TT/AFP/The Local/pr/ms