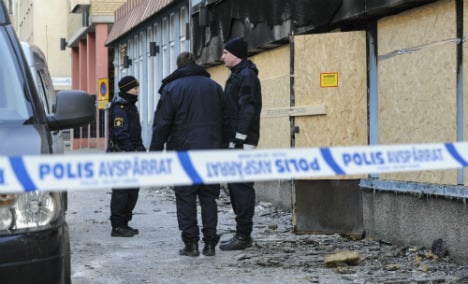 Officers inspect the scene of the mosque fire in Eskilstuna. Photo: Pontus Stenberg/TT

The incident took place in Eskilstuna and a witness claimed to see a person throwing a burning object, suspected to be a bottle of petrol, at the mosque before it exploded into flames.

However, despite questioning more than 50 people over the past three days police have yet to identify a suspect and are unable to confirm whether the fire was even started on purpose.

"Right now we have a dozen people working on this. The barriers remain in place and we are bringing in a fire expert who will give his assessment of what happened." police spokesman Lars Franzell told the TT news agency.

Among the methods used by the police was to bring in sniffer dogs who could identify flammable liquid potentially thrown at the mosque, but this has yet to yield any results.

The police have also tried unsuccessfully to track down the witness who claimed to see a burning object being thrown.

"We have not come any closer to solving the crime but we are continuing to seek out as many people as we can get a hold of," added Franzell.

It's estimated that were 70 people in the mosque, including several children, when the fire broke out. All managed to escape but five were taken to hospital.

On the same day of the incident at the Eskilstuna mosque a building in the same city, which is also used a mosque, had some windows smashed and two cars were damaged. The police have said they don't believe it has any connection with the fire.