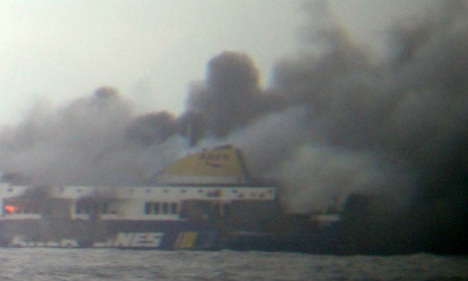 The rescue operation has been impeded by severe weather with emergency services battling gale-force winds to reach the passengers.

At the time of writing just over half of the 466 passengers have been rescued but it is estimated more than 200 people are still trapped onboard the 'Norman Atlantic' ferry.

The Greek maritime ministry said 268 of the passengers were Greek, with the crew made up of 22 Italians and 34 Greeks. But there is also believed to be French, Albanian, British, Danish, Swedish, Dutch and Russian nationals on board.

Swedish daily Aftonbladet reported that there was a Swede among the passenger list, which at the time the Swedish Foreign Office (Utrikesdepartementet) claimed it was unaware of.

Shortly afterwards the Foreign Office confirmed to Sveriges Television News that there was a Swede onboard but had yet to identify the person's identity.

The blaze on board is believed to have broken out in the ferry's car deck, where there was 222 vehicles.

According to rescued passengers, the intense heat rapidly affected the rest of the ship. However, passengers stranded on the ship later seemed to be more worried by the storm, telling Greek TV the flames were subsiding.

Freezing passengers huddled on the top deck and bridge of the ship told of their terror in calls to Greek television stations.

One told Greek television that "our shoes were melting" from the heat of the fire when they were mustered in the ship's reception area.

The ship's Greek operators ANEK Lines said "members of the crew were working with Italian and Greek authorities to evacuate the ferry", but did not say how the fire started.