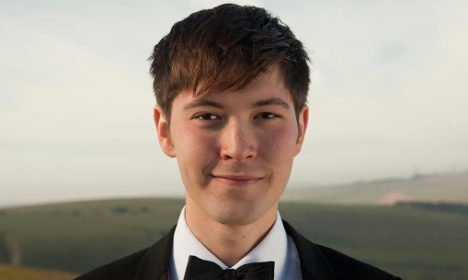 Following in the footsteps of his Swedish partner, Ho Wan Jeremy Leung made way to southern Sweden’s Lund in August of 2014 – a decision that meant leaving freelance jobs and an established network of musicians behind in the British city of Brighton.

Lacking a job upon arrival, Leung has since managed to stay in the same line of work and now teaches classical and jazz piano, theory, and composition to students of all ages at Lund’s International Piano and Music Salon (Lunds internationella piano och musiksalong).

The teaching role isn’t new to the 24-year-old pianist, conductor, and composer. Leung has previously taught students of a wide range of abilities and finds satisfaction in the job despite their level.

“It’s nice to be able to teach and show somebody something new. When someone really wants to learn, then it’s great fun.”

And Leung knows first hand the difference a genuine interest can make.

“When I was younger I was half into playing the piano. My parents told me to play and I thought ‘fine’. Later on I stopped playing and started again as a teen, and that’s when I found it – this time by myself – and that’s when I really got into it,” he says.

It was only after igniting his own will to play the piano that he could, wholeheartedly, invest in the craft. With a passion and enjoyment, Leung gets involved in as many aspects of music as he can.

To keep himself busy, he recently joined an orchestra in Malmö made up of people from Malmö's Academy of Music. Leung plays with the group a few times a week and they regularly perform at concerts.

“I’m that person, I like spending a long time learning a difficult piece of music and if I get to show that I can perform and conduct it – even better. When music comes together, that’s happiness.”

But finding a new community to be a part of in Sweden hasn’t come without some effort. Leung’s had to self-promote and self-advertise in order to find others who share his interest.

“I don’t have the word-of-mouth advantage that I’m used to. A lot of my conversations end with ‘If you need a pianist or piano teacher, forward my information’.”

Leung says you can’t shy away from putting yourself out there and that his main advice for a future expat is to be proactive and meet people and join groups.

“That, and also to save up money before coming – I lived off of my savings for three months before Skatteverket [Sweden's Tax Agency] opened my case.”

Though currently working as a teacher, Leung is keen to do more freelance jobs in the future, and perhaps even do some composing.

“I’d love to see more of Sweden and let myself be inspired and affected by this place. I’d love to give composing another go – can’t say what the results would be though,” he chuckles.