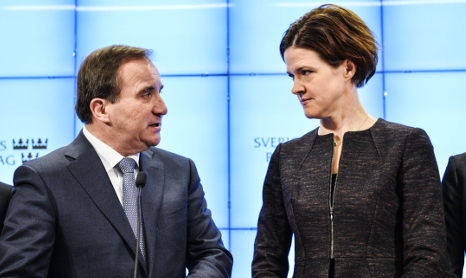 Prime Minister Stefan Löfven and acting Moderate Party leader Anna Kinberg Batra. Photo: TT
1. The Social Democrat-Green government will spend the next year following a centre-right budget
Mad as it sounds, the main consequence of the December Agreement is that Prime Minister Stefan Löfven's Social Democrat-Green coalition will remain in power, but it will follow a budget put together by the four centre-right parties that make up the opposition Alliance.
The root of the now scrapped snap election was a political crisis that emerged in early December because the Alliance put forward a budget to rival the new government's (as is customary in Swedish politics), but this ended up getting more support than the coalition's offering, because it was also backed by the nationalist Sweden Democrats.
Both the centre-right Alliance parties, the Social Democrats and the Greens have struck a deal to ensure this won't happen again: if it looks like a future government budget won't get enough support, then the main opposition parties either won't vote for or won't put forward a rival budget (leaving the Sweden Democrats' vote irrelevant). But in the meantime, it is the Alliance's budget that will be implemented in January 2015 after winning the most votes earlier this month.
As Södertörn University political scientist Nicholas Aylott puts it, the new deal is an "incredibly unique parliamentary agreement". Like many analysts he argues that all the major parties decided to put political stability first, rather than risk the uncertainty of a second election within a six-month period: "An election could have made things better for any of the parties, but it could also have made it worse".

The leaders of Sweden's major political parties. Photo: TT
2. Taxes won't go up and few policies will change in the short term
The Alliance's centre-right policies dominated Swedish politics during Fredrik Reinfeldt's two terms as prime minister between 2006 and 2014 and the Alliance-drafted budget set to be followed by Social Democrat Prime Minister Stefan Löfven's coalition builds on these. There will be increased spending on education reforms designed to improve test scores, and money invested in building new homes and in helping entrepreneurs launch businesses in Sweden. Whereas the coalition promised to raise taxes to expand welfare and job schemes, taxes will remain stable for the time being.

Taxes won't be going up in Sweden. Yet. Photo: TT
3. Things could change in the spring
All governments have the chance to revise their annual budget each spring, to adapt to events or economic changes that have emerged since the start of that year. 2015 will be no exception.
"The Red-Green government can use this 'additional' budget to try and gain some more influence over national policy, although I don't see any major changes happening as a result of this," argues Ulf Bjereld, a politics professor based at Gothenburg University.
But other experts believe this could be a more pivotal moment for the coalition.
"Come the spring we could effectively see the delayed implementation of the government budget that didn't get through this autumn. Things could change rapidly," argues Aylott.

Stefan Löfven can tweak the country's budget in spring 2015. Photo: TT
4. Expect more debate on immigration
The coalition and the Alliance parties barely mentioned immigration at their press conference on Saturday, despite a clear desire to reduce the power of the increasingly popular nationalist Sweden Democrats forming the backdrop to their December Agreement.
But while political analysts are split on exactly what shape the ongoing immigration debate will take, most agree that it is an issue that is likely to become more mainstream in Sweden, which is known for its tolerance and currently accepts more asylum seekers per capita than any other EU nation.
"The immigration issue is too big to park in the corner," says Aylott. "As the Sweden Democrats have said themselves, they can now pose as the only real opposition party. By seeking to marginalize their parliamentary power, this new agreement means they could actually end up in a much more favourable situation electorally. The coalition and the Alliance parties seem to have baked their views on immigration in stone now."
Others believe that the more right-wing members of the Alliance parties will push their leaders to change direction – including Anna Kinberg Batra, the acting leader of the Moderate Party who is expected to formally take over from Fredrik Reinfeldt in the new year.
"It is difficult to know what will happen but there may be a more open discussion between the parties on immigration. It is not so impossible that the Moderate Party would talk with the Sweden Democrats in some way in future," argues Bjereld.

Asylum seekers from Syria and Iraq will remain welcome in Sweden. Photo: TT
5. The coalition's 2016 budget should pass
It's impossible to predict where Sweden will be a year from now, but if the country escapes a major economic, political or global crisis and the Social Democrat-Green coalition remains in power, then its 2016 budget should sail through parliament when it is voted on in autumn 2015, thanks to the December agreement. This means that Stefan Löfven's government will finally be able to start implementing the policies promised to Social Democrat and Green voters in the September 2014 general election.
According to Aylott, this will nevertheless represent a "strategic victory" for Sweden's centre-right parties.
"The Alliance will let Löfven's government have a go at being in power and focus their efforts on preparing for the next election. It means that they can stick together as a political bloc. But they get the assurance that the Social Democrats and Greens will apply the same deal in future, if they end up in a position of governing with a fragile majority and need to get their budget through. They are playing the long game. In the meantime this is all fascinating to observe." Will Stefan Löfven be cheering next December? Photo: TT