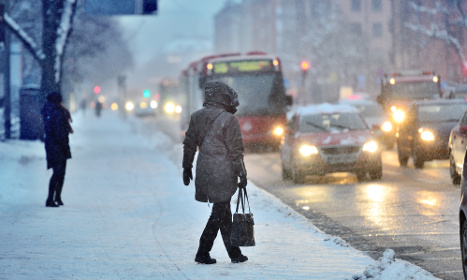 Stockholm in the snow. Photo: TT

Long queues had formed at commuter rail stations in the south of the country by 7am on Monday as workers waited for trains in temperatures of -8C, surrounded by snow and fog.

Engineers were understood to be working on fixing the problem from around 6am, but the Swedish Transport Authority said it was uncertain when services would return to normal.

“There will probably be major delays during the morning rush,” press officer Johan Tjerneng told the TT news agency.

Bus and train services in Gothenburg are also delayed because of separate problems caused by the cold weather.

At least a dozen commuter trains had arrived late into the city by 8am, according to regional newspaper the Gothenburg Post.

Some train doors had been “malfunctioning a little in the cold”, said Tjerneng, adding that icy conditions on the roads were delaying bus and coach services in the west of the country.

Trams in Gothenburg are operating as normal.