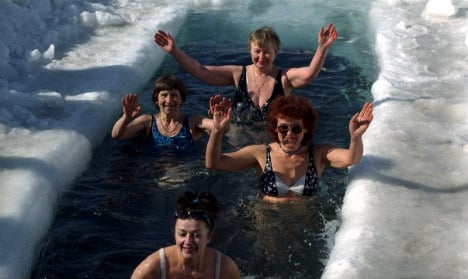 Russian trend-setters. Photo: TT
Anyone seeking to revive their deadened senses after New Year celebrations can pick one of a number of locations around the country where local "polar bear" clubs organize what in the Netherlands is known as a "Niewjaarsduik".
"It's our sixteenth consecutive year, we started at the turn of the millennium," said Berne Andersson head of the Ängelholm Vattenpoolare association, which organizes a dip at Klitterhus in south-western Sweden.
The event usually attracts a turnout of 60-70 hardy souls and several thousand spectators who watch in awe.
"The temperature is four to five degrees Celsius. The most important thing when you jump in is that you must have something on your feet, because the sand is so cold," Andersson said.
The toughest years in memory were in 2004, when strong winds battered and sand-blasted the bathers, and in 2008, when the icy cold meant that the dip had to be conducted in a narrow ice-free channel.
Winter swimming is a popular past-time in many countries, not least in Russia, where on January 19th Christ's baptism is celebrated and revellers jump into one of the numerous holes bored through ice-covered rivers.
In Canada, thousands habitually brave the cold on New Year's Day with a so-called polar bear dip, a tradition which is often associated with charity fundraisers.
While not necessary known for their harsh winters, the Dutch are apparently the best known for their dedication to the pursuit of the New Year's Day dip. 2014 was something of a record year as 46,000 folks took a the plunge at 125 beaches across the country.