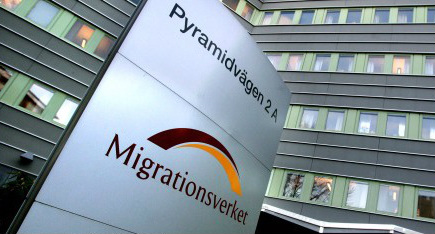 Photo: TT
When the transport arrived at a housing centre in Grytan south of Östersund the asylum-seekers didn’t like the look of what they saw.
“I am 75-years-old and come from the Middle East. Then I get sent to a place that looks like this,” said a man from Syria to the local Östersunds-Posten daily, pointing to the icy road.
“It is dangerous for me to be here,” he said.
The asylum-seekers, who originate from several countries, refused to leave the bus when it arrived at the small Swedish town. The police were called to assist at the scene but declined to help in escorting the group from the bus.
The group is demanding that they be returned to Malmö or some other bigger city.
“They were disappointed when they arrived here. It was cold and is not a big city. It is difficult for the police to do anything. We can’t eject them from the bus – the matter must first be dealt with by the Enforcement Service (Kronofogden),” said Bengt Stadin at Jämtland police.
The Migration Board’s (Migrationsverket) press officer Fredrik Bengtsson explained that asylum-seekers are not entitled to select the location of their residence.
“We have experienced sometimes that asylum-seekers have a idea of what to expect in Sweden. When that image does not correspond to reality, it becomes a problem.”
“When we have the current situation where so many are arriving in Sweden then we are unable to house them all where they want to live.”
Asylum-seekers are however free to find their own accommodation in a city of their choice.
“If they refuse to leave the bus then it is up to the individual to solve their housing situation through relatives or friends,” Bengtsson said.
The group of asylum-seekers have explained that they feel cheated by the Migration Board.
“No one told us where we were going. Then we were told that we would be taken 40 minutes from Stockholm and in the end we had gone 15 hours,” one of the man told Sveriges Radio Jämtland.
According to the Migration Board around a dozen people decided to move into the accommodation in Grytan which is home to around 150 people. A further three arranged their own housing.
There remain about 40 people protesting, with groups taking it in turns to guard the bus and ensure that it doesn’t drive away and leave them in Grytan.