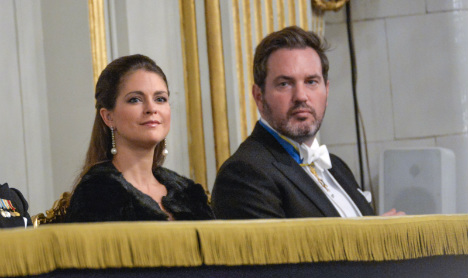 Photo: TT
The Local reported last week that the couple were planning to leave their home in New York to move to Europe and the Royal Cpourt has now confirmed that Stockholm will be their base for the near future.
"They have terminated the contract and have emptied their apartment. They will now be based in Stockholm," said Margareta Thorgren at the Royal Court to the Aftonbladet daily.
Princess Madeleine revealed the plans to return from the US in the Sveriges Television programme "A year with the royal family 2014", saying that she wanted to be closer to her family.
IN PICTURES: Princess Madeleine through the years
The couple currently live in Manhattan with their baby daughter Leonore. The royal family recently made an announcement that the couple were expecting their second child, who will be sixth in line to the Swedish throne. Photo: TT
IN PICTURES: Princess Leonore's baptism
The baby is expected in the summer.
Princess Madeleine recently appeared at the Nobel festivities in Stockholm in December, after taking time out from her royal duties to focus on looking after her daughter.