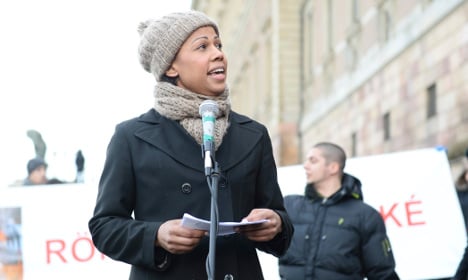 Sweden's Culture and Democracy Minister Alice Bah Kuhnke. Photo TT
Sweden is getting a bad reputation.
Headlines across the world screamed this week that three mosques had been torched deliberately and journalists were quick to point out that rising tensions followed the nationalist Sweden Democrats doubling their support to 13 percent at the last election in September.
On the home front there has been a mixed reaction to the attacks. Online forums saw some Swedes praising what had happened. It became clear there was some kind of community delighted that sacred buildings had gone up in flames.
As The Local tweeted from the anti-racism rally in Stockholm designed to counteract the support for the violence, we were bombarded by Islamophobic replies, while racist comments flooded our comments section.
But the Stockholm rally was evidence that many more people still support a peaceful and tolerant Sweden. Thousands faced the winter chill to hear speakers from the Islamic community.
One of those speakers was Alice Bah Kuhnke, Sweden's Minister for Culture and Democracy.
The half-Gambian Swede spoke to a glove-muffled applause about how she planned to tackle the growing tide of Islamophobia, and how knowledge was the only cure for prejudice.

Knowledge is the best vaccination against prejudice, says the Democracy Minister. pic.twitter.com/JS9Cvah8A5

She told The Local afterwards that she had cried when she first heard about the mosque fires.
"It may seem like this situation has only just happened – but it has actually been going on for several years," she said.
She said that she was piecing together an action plan together with the rest of the government.
"That's one of the biggest things we're doing right now. And we've also put certain security measures in place when it comes to protecting the mosques and we have intensified the dialogue between the police and the Muslim civil society."
Others used their speeches to throw more direct criticism at the nationalist Sweden Democrat party, which is growing in strength.
Among them was Amer Sarsour, a poet who entertained the crowd with his spoken-word dict entitled "Mister Sweden Democrat" – which included lines like "You're like a soft bit of chocolate that I want to eat and then shit out".

Poet Amer Sarsour. Photo: The Local
He told The Local afterwards that he thinks some Sweden Democrat party members are just confused, and that they are actually kind under the surface. But their messages, he argued, are the root cause of the recent problems.
"The Sweden Democrats are agitating people against the Muslim community…It's actually a big problem because they want people to fight against each other," he said.
"They say Muslims are a problem – but Muslims have never been a problem in Sweden. The Sweden Democrats have played a role in all that's been happening – the Islamophobia, the racism against Muslims. They're fooling the people. They use lies, they play on emotions," he lamented.
"And why should you fear the Muslims? They try to preach peace. They want to live in peace and prosperity, and they have lived this way in Sweden for a long time. They don't want to bother anyone. I don't think people should be afraid, I mean, that would be strange. That's something that started with the propaganda since 9/11 in 2001. It's been an agitation against the Muslims since then. I understand people associate Muslims with terrorists but it's wrong and it has to stop."

Yasin Ahmed, 43, is "surprised and thrilled" so many are at Stockholm anti-racism rally on Jan 2nd #bräninteupp2015 pic.twitter.com/7eHmhNMg40

Anti-racism campaigner Yasin Ahmed, 43, The Local he had attended the rally because he believed the fires represented "an attack against Swedish democracy".
"I wanted to show solidarity with other Muslims. We have to debate this subject. I am very glad that many people here today are not just Muslims, they are here from many different religious backgrounds," he said.
Minister Bah Kuhnke, meanwhile, insisted that despite the recent negative publicity, Sweden shouldn't be scratched off the "paradise" list for immigrants on which it has long enjoyed a prime position. Sweden's new Culture and Democracy Minister Alice Bah Kuhnke. Photo: The Local
"Sweden is still a paradise, in many ways. But we have some problems that we really need to change – and we're going to change them. I hope that the picture of Sweden will still be a paradise when it comes how we want to fix these problems," she said.
The minister added that she thinks she has the arsenal to fight for peace.
"I got very upset when I heard about the burned mosques…But I look at problems and think what can I do from the position I am in," she explained.
"I'm a minister – I have the democratic weapons to change this."
Follow Oliver Gee on Twitter