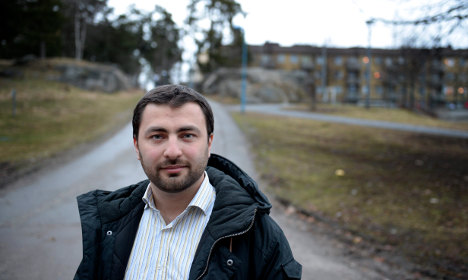 Omar Mustafa says Islamophobia has become part of everyday life in Sweden. Photo: TT
Sweden has made global headlines this week after unknown suspects torched three mosques in different parts of the country. Coupled with a growing anti-immigrant sentiment flowing from the increasingly popular nationalist Sweden Democrat party, the head of Sweden's Islamic Association says things are getting worse.
"The climate in Sweden is very serious right now and Islamophobia is getting stronger. And it's not just on the internet, this is happening in real life," he tells The Local.
Over a seven-day period, fires broke out in Eslöv, Eskilstuna, and Uppsala, with someone scrawling the words "Go home Muslim shit" on the main door of Uppsala's mosque on Thursday.
"We don't know who has carried out this attack and the police can't find a single suspect. We know the attacks were praised on Islamophobic sites, with many people leaving racist comments directly after the attacks."
He said that there had been fourteen confirmed attacks on mosques over the past twelve months.
"There have been a lot of scary things happening lately, but it's important to remember that there's a lot more happening than the series of attacks this week. Muslim women on the streets of Sweden are getting harrassed almost daily," he added. Police on the scene at the Uppsala mosque on Thursday. Photo: TT
Mustafa pointed to the Instagram account "Muslimskkvinna" (Muslim women), which boasts over 10,000 followers and shares details and images from the experiences of Muslim women in Sweden and how they are treated.
Recent posts show a smashed-in car window, pictures of women who have been attacked, and even a note pinned on a wall with a swastika and the words "Die Muslim" written in black marker pen.
Peaceful demonstrations are planned for Friday in Gothenburg, Malmö, and Stockholm. They have been organized by 30 different groups including political parties and the Swedish church. Over 6,000 people have joined related Facebook groups and promised their attendance.
"The whole point of the demonstrations is to show solidarity, our right to religious freedom, the fact that the mosques have a right to be here in Sweden, and to gather up different parts of society to be involved," Mustafa explained.
Mustafa said he wasn't sure if there was a "direct connection" between the attacks and the Sweden Democrat party, which pulled in a record 13 percent of the public's support in the September elections.
"But even if the Sweden Democrats aren't connected, it's a symptom. The Sweden Democrats are driven by an anti-Muslim agenda and a big part of society has bought into it. Everyone knows that a big part of their agenda is hate towards Muslims, and the Roma community too," he said.
"I'm happy about the attention this has got from both the government and the police. I can only hope the public takes it seriously too and can propose some way of beating this hate and terror that Muslims experience in their daily lives."