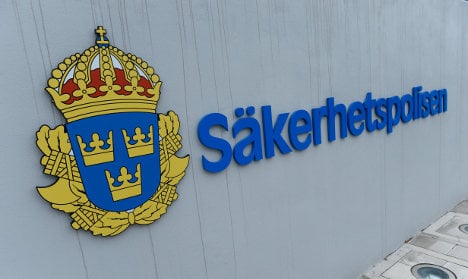 The exterior of the Säpo offices in Solna, Stockholm. Photo: TT
"We're on Twitter now, for safety's sake," wrote Säpo. "Follow us, because we're following you," read the debut post.
The tweet was well-received by Sweden's Twitter crowd, garnering over 3,000 retweets in just a few hours.

Säpo press spokesperson Sirpa Franzén said that the idea came from an internal competition.
"We've been working for the last ten years on being more transparent. This is a part of that work," she told the Aftonbladet newspaper.
She said that the tweet was written "with tongue in cheek", adding that the account would be used to explain what the service was doing and how they were carrying out operations.
The CIA in the US also caused an online buzz when it sent its first tweet last year.
"We can neither confirm nor deny that this is our first tweet," the agency wrote. The result? Over 300,000 retweets.
Sweden's Security Service (Säkerhetspolisen) is the parent agency of the National Police Board and works primarily with intelligence operations.