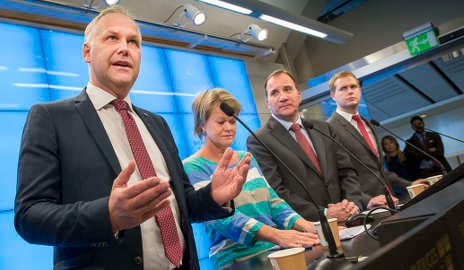 Left Party leader Jonas Sjöstedt (left). Photo: Jonas Ekströmer/TT
Jonas Sjöstedt’s attack, unleashed in an interview with Sweden’s Expressen newspaper, is a sign that the last-minute deal Prime Minister Stefan Löfven struck last month with Sweden’s right-wing alliance is causing tensions with the the Social Democrats' traditional left-wing allies.
In his attack, Sjöstedt issued a stark warning that if the Social Democrat-Green coalition failed to stick to a deal struck last year to limit the extent to which private companies can profit from providing state services, it would no longer be able to count on his party’s support.
“If they betray us on the profit agreement, they can forget about negotiating a budget with us,” he said in the interview. “I don’t think I can be any clearer than that.”
He criticised the negotiating stance Sweden had taken in December's climate change talks in Paris.
"The government is a huge disappointment in terms of its work for the climate, the goals it has for climate change, and how it acts in the European Union," he said, before laying into its support for the controversial planned Transatlantic Trade and Investment Partnership (TTIP) with the US.
"The government has chickened out," he said of the deal. "You should say 'no' to an agreement which means that companies can sue countries."
Social Democrat Prime Minister Stefan Löfven took a pause from his visit to Brazil to defend his record, arguing that Sweden has an enormous amount to gain from the TTIP deal.
“Swedish exports make up about 50 percent of our GDP,” he stressed. “Everyone should be able to understand how much we have to gain from free trade. The free trade deal between the EU and the US is fundamentally a good thing.”
As for the climate change deal struck in Paris in December, Löfven pointed out that Sweden’s negotiating power had been limited.
“It’s not as if Sweden controls the whole European Union,” he said. “We had higher ambitions, of course, but it’s important now that the EU still has has a clear objective.”
On Saturday Löfven visited a children’s home in Brazil, where he reflected on of his own time in the orphanage where he was sent as a ten-month-old baby, and posed for photographers playing table tennis.
“It is a part of my background. Now it is with a certain distance, but of course I think about it sometimes,” he said. “It was incredibly fortunate that I quickly got sent to a family who could and would take care of me. It has given me incredible opportunities in life.”