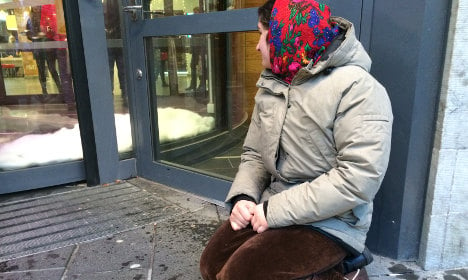 Anna, 20, begs in Umeå. Photo: The Local
The ice is slippery on the petrol station forecourt where half a dozen caravans are lined up on a tiny patch of grass next to a forest.
Inside one of them, Culai Ciurar, who is 23 and from Romania, is cooking lunch.
“It's good here in Sweden, I like it,” he says in broken English as potatoes bubble in his pan – the only ingredient in his midday meal.
“The weather is like Romania, so it's not so cold for us,” he insists.
According to Umeå City Council, around 70 Roma beggars like Ciurar arrived in the region in 2014, which is home to around 118,000 people. As EU migrants from Romania, they can easily travel to Sweden as EU tourists under the right to Freedom of Movement, without the need for a visa or a work permit.
Ciurar says he makes between 100 and 200 kronor a day (up to $25) from asking for money on the streets.
“In Romania I don't have a job. It's the same here. I worked a bit in construction but I make more money here begging,” he says.
“I am looking for work here, though”. Culai Ciurar has been begging in Sweden for three months. Photo: The Local
Dressed in a long pink skirt and cradling a toddler, another beggar living a few caravans down from Ciurar doesn't want to give her name, but explains that she moved to the country just two weeks ago to save up for a better life for her family. She says she plans to return to Romania once she has earned enough money to help her children through school there.
“I don't beg every day because I have two children, so it is maybe one day me and then one day my husband [begging]. I do find it very cold,” she admits.
“They are very nice people here. They are good. They help”.
Just as she finishes her sentence, a man appears from the caravan next door and jogs back to a smart car parked across the forecourt. He's a 50-year-old from Argentina who's been living in Sweden for a decade and has passed by to drop off a food donation.
“Why am I here? Well I am in a rush but I must say these people need food. They don't have anything. I think they need food, a little bit of help or money. These conditions are not perfect for them”. The petrol station carpark where dozens of beggars live. Photo: The Local
Thousands of beggars have arrived in Sweden over the past three years, with ninety percent of them travelling from Romania, according to figures released by Stockholm's Social Administration in April 2014.
Umeå has a repuation as one of the most tolerant cities in Sweden and many locals say it is no coincidence that growing numbers of beggars are choosing to migrate here rather than heading to Sweden's bigger urban centres. Long a champion of feminism and gay rights, Umeå is a hub for students and a socialist stronghold, with just 5.6 percent of the population voting for the anti-immigration Sweden Democrat party in the last general election in September 2014, compared to 13 percent nationwide.
“It's a very special and open place and in general immigrants have been integrated really well here,” argues Christian Cederlind, a 24-year-old bartender who is half Columbian.
“But of course there are some people who are afraid of change or of a different skin colour…This is the last really civilised outpost in northern Sweden, and now there is rising immigration here and some of the same problems as in Stockholm, it is like a slap in the face for many of the older generation”.
He says hostilty towards beggars has risen after a video showing two man begging on crutches and later walking unaided in a store went viral earlier this year
“But I think you have to remember that we're probably talking about one or two per cent of beggars coming here being criminal, and we should still think about what kind of a life drove them to do that,” argues Cederland.
All Swedish municipalities are advised to follow national guidelines to provide support to beggars, but it is up to each region to decide exactly what or how much help they should offer. Umeå City Council runs schemes that provide food and emergency shelter to vulnerable EU migrants alongside assistance with healthcare costs. There are also several charities in the city that offer further help to the Roma community and refugees.
“We ensure that we comply with applicable laws and regulations and we also give support to the voluntary sector, coordinating the private aid efforts,” says City Manager Jonas Jonsson.
“This is the level that Umeå Municipality has today and it is valid until our politicians decide on another level of ambition”.
But there is concern among some sections of the community that Umeå has already gone too far and that resources should instead be put towards helping the beggars to return home.
It is a subject that Ritta Lindahl, a former social worker and her son Marcus are very vocal about, when The Local meets them at a book store-cum-coffee-shop on the outskirts of the city.
“Romanian organizations and the EU must help them and there should be more of a focus on the long term. You can give them money now but how is that going to help them next week or the week after. They should not be here and I have seen some beggars being harassed physically by those who really strongly think they should get out of here,” argues Ritta.
Marcus adds: “We need to save the next generation. Most of the kids aren't even going to school. They come to rich Sweden and there are so many nice people and kind people here in Umeå giving them food and money, but it is not changing the possibilities they have in life”. Umeå resident Marcus Lindahl says that begging is only a short term solution. Photo: The Local
The Swedish government and the EU have both urged the Romanian government to focus on improving living conditions in Romania, so that fewer people leave the country to beg elsewhere in Europe.
Romania's Social Affairs and Labour Minister Rovana Plumb has accepted an invitation to Stockholm in January to discuss the issue. Sweden's Minister for Children and the Elderly and Gender Equality, Social Democrat Åsa Regnér, has said that Sweden is willing to help Romania fight for additional EU funding and suggested that Sweden might also provide technical assistance to help ensure any extra money is spent responsibly in future.
Back in Umeå, most of the beggars are just concentrating on getting through the rest of the day. Rain has started beating down and is turning the ice and snow into a dark slush.
A twenty-year-old named Anna is huddled next to the revolving door of one of Sweden's most popular high street stores. She smiles as she holds out a battered coffee cup. It's unclear whether her hand is shaking to draw attention to herself, or involuntarily because of the cold.
Asked if she has ever experienced hostility from locals, she provides a familiar answer, her smile appearing perhaps a little too forced:
“I like it here. The people are nice. They help me”.