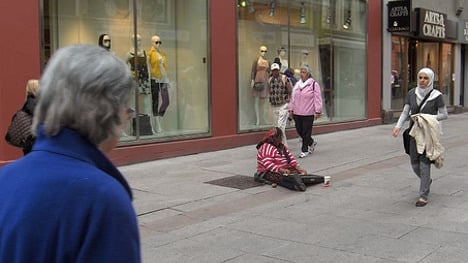 A person begging on a Stockholm street. File photo: TT
"Begging has been around as long as there has been poverty," explains history professor Dick Harrison.
The history of begging is intrinsically linked to population changes. During the Middle Ages the cities grew and beggars became more numerous, and thus more noticeable, Harrison explains.
"As they become more numerous, their status declines. If there is a balanced number, we can relate to them and feel pious when we give them money. But when the group grows, they create anxiety."
Attitudes to beggars began to diverge in the Middle Ages and people started to distinguish between good and bad. The right kind were those who were considered to have reason to beg, perhaps because of old age or inability to work. But there was no mechanism for regulating begging.
"It was only from the late 1500s onwards that the government began to develop and authorities had the power and ability to do something. The state became more controlling. Beggars were vagrants and of dubious character. They had no fixed abode and that was looked down on, because then they were difficult to keep a check on," says Dick Harrison.
Begging was regulated in due course and individuals were subsequently only allowed to beg within a certain area and when in possession of a "beggar pass". The 1800s witnessed progressively tougher attitudes towards street begging and in May 1847 the practice was outlawed entirely.
"There was a major reform movement in the 1840s. There were a great many new laws, several which concerned poverty relief. One example was compulsory elementary school."
Harrison explains that the begging ban only partially worked.
"Some slipped through the net, they were targeted and were penalized."
"The only thing that has worked and that really eradicated begging, was the Welfare Society (Folkhemmet). The begging ban was abolished in 1964 – it was no longer needed. Poverty was considered history," Harrison explains.
While poverty was never really fully stamped out in Sweden, the streets were largely free from beggars for several decades from the 1960s onwards, Harrison observes.
"But the psychiatric reform in 1995, when mental patients were released, signalled the return of begging. Many were unable to support themselves, they roamed the streets and began to beg for a living. I remember this myself. People say that begging came with the Romanian beggars, but that's not true. It began in the 1990s when the welfare state was shown to be insufficient."
Dick Harrison believes that the debate in favour of a new begging ban will grow in the future.
"This has been the case every time numbers of beggars have grown, it has already begun. It is clear that the politicians don't know how to respond. No one has discussed the matter for a hundred years."