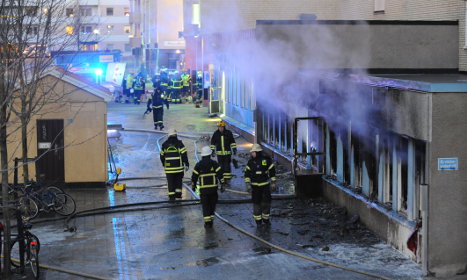 Eskilstuna mosque in Sweden was set on fire on Christmas Day. Photo: TT

Five people were injured in the fire which was the first and most serious in a spate of mosque fires that have been widely blamed on growing anti-immigration sentiment in Sweden.

Rumours had earlier circulated that an object had been thrown into the mosque in the city of Eskilstuna, west of the capital Stockholm, but police have been unable to find witnesses.

Swedish network TV4, meanwhile, on Monday cited unnamed police sources saying that an accident was in fact the cause of the fire.

"There are a thousand ways to start a fire. At the moment, we do not know," Eskilstuna police spokesperson Lars Franzell told AFP, adding that police were awaiting a forensic report due in late January.

"We cannot dismiss suspicions that a crime was committed," he added.

Police have said they suspect arsonists were behind two subsequent mosque fires, in the southern town of Eslöv and in Uppsala, north of Stockholm, which occurred within a week of the Eskilstuna blaze.

The fires sparked protests in several cities and condemnations by political and religious leaders.

According to the anti-racism magazine Expo, there have been at least a dozen confirmed attacks on mosques in Sweden over the past year.

Many in Sweden see the incidents as a reflection of growing Islamophobia amid concern that mass immigration is fuelling the rise of the populist far right in the traditionally tolerant Nordic country which is expected to receive a record 100,000 asylum applications this year.

In December the country's political landscape was altered after the Sweden Democrats, a far right anti-immigration party, helped strike down the minority government's budget.