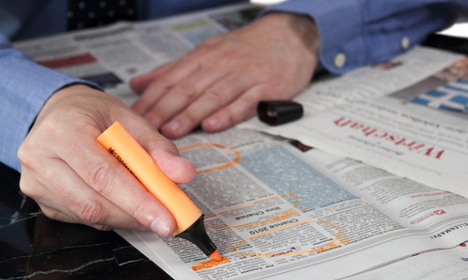 Job hunt Photo: Shutterstock
The "workers" were told during interviews that they would be employed by a company with strong ties to Alwex, a Swedish transport and logistics company.
They signed contracts and were told to meet at the front of an Alwex factory in Växjö on Monday morning, reported the local Smålandsposten newspaper.
But managers at Alwex said they'd never heard anything about the jobs – and they weren't expecting 100 Swedes to turn up on their doorstep.
"We didn't know anything about this, but our name is being dragged into some kind of bluff," Managing Director of Alwex, Mats Lundmark, told The Local.
"We only found out late last night when rumors started to circulate and then everyone showed up this morning."
He added that he was baffled as to why someone would trick so many people, especially considering there didn't seem to be anything to gain from it.
"I just can't understand it. These people were disappointed, a lot of them had just been celebrating over the Christmas period that they'd got a new job – and they showed up today to find it was just a bluff. Most of them were more or less speechless."
Lundmark said that the police, who were called to the scene, were unsure how they would tackle the case or how they would label the crime.