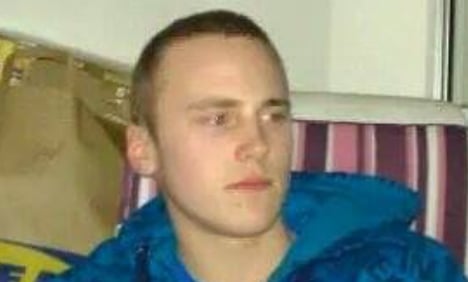 Patrik Bragsjö, 22, died after taking drugs at the weekend. Photo: Private
Eva Bragsjö's son Patrik died on Sunday after taking drugs at a party in Stockholm's Sigtuna.
The 22-year-old is believed to have been given two so-called 'Superman' pills – pink, triangle-shaped tablets with the letter 'S' imprinted on them, resembling the famed Superman logo.
"Young people need to understand that you can never know what you are doing when you take drugs. Some people manage and some don't. It's like playing Russian roulette," she told The Local.
"Losing a child is the worst thing a mother can think of," she added.
The 'Superman' pills contain a large concentration of the PMMA chemical, which works in a similar way to MDMA, the main ingredient in ecstasy. But PMMA acts more slowly, encouraging some people to take more pills when they don't experience the high they were expecting.
The tablets are known to have been in circulation in Sweden, the UK and the Netherlands in recent weeks. Four deaths in Britain were linked to the drug between Christmas and New Year and people in Canada and Israel are also understood to have died after taking the pills.
Two other deaths in the Stockholm area have been linked to the drug. Police are still investigating Patrik Bragsjö's case.
"Patrik was the kind of boy who was mainly home all the time. He liked to sit at his computer playing online war games with friends, or he was just eating or sleeping. He was not a drug addict so this shows that what happened to him can happen to anyone," his mother said.

Eva Bragsjö, whose son Patrik died after taking drugs. Photo: Private
Swedish drug charities say that an increasingly liberal and open approach to the use of illegal substances is becoming more common in Sweden, which has a tough zero tolerance approach to drugs, focusing on prevention, treatment, and control.
"Everything from expressions where drugs are present in our everyday language to drugs being glorified on Instagram and other social media [is having an impact]," Karin Jordås, secretary general at Mentor Sweden, an NGO focusing on health promotion and prevention of drug abuse among young people told The Local.
"We believe that there is a connection between the lack of adults in the lives of young people and the risk of making poor decisions where drugs can be one of them," she added.
Rising numbers of Swedes have died following drug abuse in recent years. The drug-induced mortality rate among adults aged 15 to 64 was 62.6 deaths per million in 2012, more than three times the European average of 17.1 deaths per million.
"It is an international problem and everybody is trying to do something, but nobody really knows how to get ahead of these groups that produce and sell these kind of drugs," Per Johansson, Secretary General of RNS, Sweden's largest anti-drug campaign organisation told The Local.
"We have been trying to persuade the Swedish government to be much more active dealing with new synthetic drugs, but in the last few months the politicians have been more focused on worrying about the messy political situation. Hopefully they can do more now that is resolved."

Patrik Bragsjö rarely went out, according to his mother Eva. Photo: Private
While other countries such as the UK have dealt with rising drug use by offering "harm prevention" services designed to educate those who decide to take drugs to do so more safely, Sweden has so far avoided this strategy.
"The government needs focus on preventive work and be prepared to find a way where we can educate parents and schools before we see more of these tragic headlines," Mentor's Jordås argued.
"To start saying 'don't do the pink ones, do the blue ones', that is just accepting the problem. The only safe way to go about this is to persuade people not to use them at all and to try and stop the people who are getting rich quick by selling them to people," added Johansson.
"The 'harm reduction' road is a dangerous one to walk, where you just see drugs as a natural path in young people's lives. Sweden chose another road – a more restrictive one saying 'don't do drugs at all'. But seeing as there have been deaths in both the UK and Sweden recently, we can see that neither of these roads are perfect."
Eva Bragsjö says she is pleased that 'Superman' pills have grabbed both national and international headlines following her son's death.
"The newspapers are enlightening people about drugs at the moment. What I want to hear more about is what the police are doing. Are they trying hard enough to find the sources of these drugs?"
The Local's telephone and email requests for an interview with Stockholm police went unanswered on Wednesday.