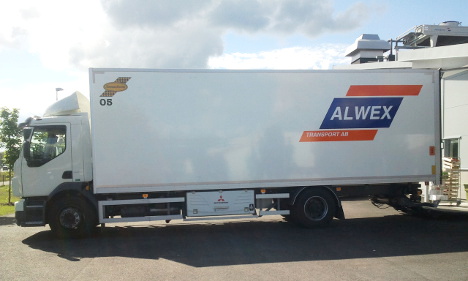 Alwex says it did not offer any of the jobs. Photo: Växjö.se
Dozens of workers turned up to the Alwex factory in Växjö on Monday morning for what they thought would be their first day of work, only to discover that their new jobs did not exist.
Police have spent the last few days investigating and say they are now talking to a man in his forties. The suspect has been registered at fifteen different addresses in the last fifteen years, according to the TT news agency.
Managers at Alwex – a Swedish transport and logistics company – have repeatedly denied knowing anything about the fake jobs.
"We didn't know anything about this, but our name is being dragged into some kind of bluff," Managing Director of Alwex, Mats Lundmark, told The Local on Monday.
"I just can't understand it. These people were disappointed, a lot of them had just been celebrating over the Christmas period that they'd got a new job – and they showed up today to find it was just a bluff. Most of them were more or less speechless."
The hoax has made international headlines, with newspapers in China and France among those reporting on the scam.