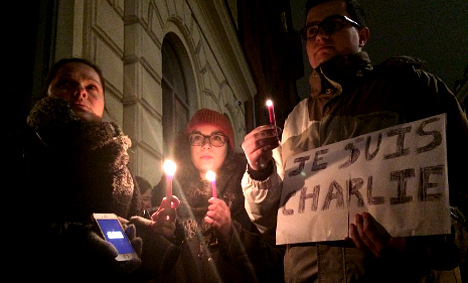 The crowds weren’t as large as those at similar rallies in France, Germany or the UK, but there was a calm and respectful atmosphere that spoke volumes, at the French embassy in Stockholm’s Östermalm neighbourhood.

The spontaneous vigil, which was organised via Facebook, saw around a hundred people gather by 8pm.

Some brought banners with the ‘Je suis Charlie’ (I am Charlie) slogan on them, while others lit candles and stood quietly on the icy street, in temperatures hovering just above freezing.

“People are spontaneously gathering to show their emotion after this barbaric terrorist attack,” France’s Ambassador to Sweden Jacques Lapouge told The Local at the vigil.

“France is united in the defence of freedom of expression and of the press," he added.

LIVE: The Local France reports on the Paris shootings

Among the crowd in Stockholm were French students taking part in the Erasmus exchange programme, French expats working for international companies in the Swedish capital, embassy staff and French, British and Swedish journalists.

“We were very surprised when we saw that freedom of expression could be threatened in this way in the centre of France and so we came to show that we still support this value that is very important for us,” said Lea Duriex, 19, a student from western France.

“The atmosphere here is calm but we are all here to show that we are not giving up today. We want to show that France can still be a nation like it was before, centuries ago…and we can still fight against all the threats that we face today.” Candles and flowers were left outside the French embassy on Wednesday. Photo: Maddy Savage/The Local

The mass shooting at Charlie Hebdo followed a series of race or religion-related attacks across France in recent weeks and comes amid fears of rising Islamophobia in the country, which has a growing population of immigrants from former French colonies including Angola.

Some protestors at the rally criticised France’s government for failing to do enough to stop the violence.

“It is a very complicated situation and we should not just ‘amalgamate’ all muslims and extremists, because most muslim people are not extreme,” protestor Lucas Bayle, told The Local.

“The problem in France is that every time an attack like this happens nobody wants to talk about it, because they don’t want to be labelled as racist. But it is the case that some muslims agree with what happened. I have seen this on social media and on Facebook – people saying it was their fault [the magazine], so it is logical that this happened and I think that there is a big problem with this kind of mentality.”

Others said they were still in too much shock to process the political implications of the attack.

"My Swedish colleague ran into a meeting room to tell me," said Jean Barnard, who works as an engineer in Stockholm.

"I don't know how my country should deal with this but tonight the main thing is to remember the people who have died because of this craziness."

From Paris, Sweden's Ambassador to France, Veronika Wand-Danielsson, tweeted that her thoughts were with the victims and their families, describing the attack as "horror – unprecedented cowardice!".

Earlier on Wednesday, Sweden's Social Democrat Prime Minister Stefan Löfven released a statement, calling the shooting "a disgusting attack on democratic foundations," and adding that it underscored "our responsibility to always stand up for freedom of expression and press freedom."