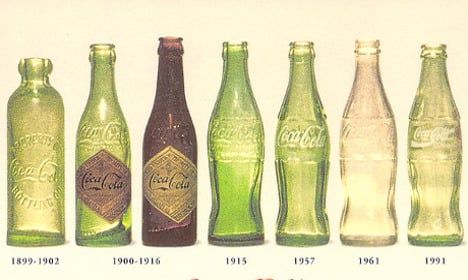 Samuelsson helped design the curvy Coca Cola bottle, known as the “contour bottle”, when in 1915, Coca-Cola launched a competition among its bottle suppliers to create a new look for their beverage that would distinguish it from its competitors. The Root Glass Company, based in Terre-Haute, a small town in Indiana, participated in the bid, and the project was turned over to members of its supervisory staff, including Swedish emigrant Alexander Samuelsson. Sadly, the Swede and other colleagues who directly assisted in the creation of the successful bottle received little compensation compared to the glass company business owner – he reportedly became a multimillionaire following the bottle's success.
2. Eric Wickman Transport giant Greyhound operates throughout the US and Canada. Photo: Flickr
North American bus company Greyhound Lines Inc. owes its roots to Swedish businessman Eric Wickman – formerly Martis Jerk – who was born in 1887 in Vamus, Sweden. He changed his name to Wickman after emigrating to Hibbing, Minnesota in 1905. He launched the first bus service from Hibbing and Alice, also in Minnesota. The UK's Times newspaper described him in 1930 as America's bus king, referring to him as a “large, broad-shouldered man who never lost his Swedish accent”. Today, Greyhound buses continue to be a popular means of transport for individuals travelling between cities across the US and Canada.
3. John W. Nordström A Nordstrom store in Washington State. Photo: Flickr
This last name probably sounds familiar for a reason – it is the name of upscale retail empire Nordström which Swedish-born Johan (later changed to John) Nordström originally co-founded as a shoe business with friend Carl Wallin in Seattle. Born about 100 kilometres from the Arctic Circle in the small Northern town of Alvik, near Luleå, Sweden, Nordström came to the US at age 16 with just $5 to his name. After working at a saw mill, the ambitious young Swede headed off to Alaska, like many other Americans at the time, in search of gold during the Klondike era. Returning with a handsome sum, he launched Wallin & Nordstrom, a shoe store in 1901. Today, the upscale department store chain operates hundreds of stores across 40 states.
4. Mary Anderson Anderson influenced the American workplace. Photo: Shutterstock
Anderson is one of the most prominent Swedish-American women in history, playing a central role in furthering women's rights in the US workplace. Her extraordinary career saw her thrive as a member of President Roosevelt's office and later as head of the Women's Bureau of the Ministry of Labour, holding that office for over two decades. She was described in 1935 by American feminist Carrie Chapman as “one of the ten most outstanding women in the United States”, and is certainly recognized as the most popular Swedish-American woman involved in trade unions and politics in the US. But while well-known during her time there, Anderson seemed much less known at home. She died in 1964.
5. Frederik Lundin Home-made juniper ale. Photo: Flickr
A jack of all trades from humble beginnings, Lundin emigrated with his family from a small village in Östergötland to the USA in 1880, when he was just 13. His success took off before he was even 20, when he created Juniper Ale – a beverage he concocted based on a recipe from his home parish in Sweden, using juniper berries. That drink brought him early fortune. His career gradually evolved from ale creator to US Congressman, with a successful political career beginning 1893. Swedish author Jan-Olof “Jolo” Olsson described him in the 1950s as the “the invisible force and power behind the Republican Party”. Lundin meanwhile has reportedly declared that he was never “particularly interested in politics and have never had any influence. I have never been more than a poor Swede in my entire life.”
6. Charles R. Walgreen One of thousands of Walgreens drugstores in the US. Photo: Flickr
You recognize this name from one of America's largest pharmacy chains. Indeed it was Swedish pharmacist Charles Walgreen who founded the mega-drugstore, which today operates 8,217 stores in all 50 American states. Born in 1873 in Illinois, his father Carl Magnus Olofsson came to America from Sweden, at which time the family name was changed to Walgreen.
7. Curt Carlson A Radisson hotel in Frankfurt, Germany. Photo: Flickr
This man was the founder of Carlson hotel chain, which includes well-known hospitality industry names Radisson and Park Plaza. The second-generation, Minnesota-born Swede reportedly used a $55 loan to launch his venture. The company's 2012 sales, including those from franchised operations, totaled $37.6 billion and it remains one of the largest family-held corporations in the United States, with granddaughter Diana Nelson assuming the chairmanship of the board of directors in May 2013, succeeding her mother, Marilyn Carlson Nelson, who continues to serve on the board.
8. Andrew Lanquist Chicago city skyline. Photo: Shutterstock
Chicago-based Swede Lanquist developed one of Chicago's earliest skyscrapers, the Monon Building, although the 45-metre, 13-floor building erected in 1890 was demolished in 1947 to give way for a Chicago Parkway to be extended through the block. Lanquist was also the man behind the Wrigley Building which after construction in 1922 became Chicago's tallest building. In the early 1900s, more Swedes were being born in Chicago than back home in some of Sweden's own cities, and 100,000 Swedish immigrants were living there at the time.
9. Peter Aron Aronsson and Gideon Sundbäck The zipper was perfected by two Swedes. Photo: Flickr
The zipper is a well-known Swedish invention. It was first patented back in 1851 by an American sewing machine designer named Elias Howe. However, it was two Swedish-Americans who took on perfecting that patent into a fully functional 'device', Mr. Aronsson and son-in-law, Sundbäck, an electrical engineer. Together they began in 1903 to work on the project from inside a zipper manufacturing company in Hoboken, New Jersey. Sunbäck later went on to build the world's leading zipper factory in Pennsylvania and in 2006, he was added to the US' National Inventors Hall of Fame for his work on the development of the zipper.
10. Walter Hoving A girl's best friend. Photo: Flickr
This Swedish-born American businessman headed jewellery giant Tiffany & Company from 1955 to 1980, bringing the company to enormous success during that period. Born in Stockholm, he immigrated to the US with his parents in 1903. He took control of Tiffany's at a time that the jewellery retailer was on the brink of going out of business, turning it into one of the most recognizable luxury goods brands on the planet.
Norhan Elhakeem
Article written in 2015 and updated in 2017.