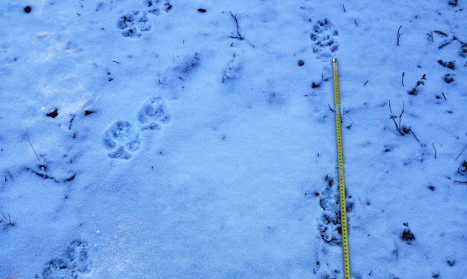 The tracks discovered this week. Photo: Länsstylrelsen
Animal experts believe that two wolves have made the Swedish capital their home and are currently analysing what are believed to be their droppings.
The County Administrative Board of Stockholm (Länsstylrelsen), which is responsible for monitoring the movement of animals in the city, is investigating.
"The collected droppings will be DNA tested and this will hopefully provide answers on whether the two wolves have been marking their territory," said Arne Söderberg, a spokesperson for Länsstylrelsen in a statement.
The droppings and urine were discovered in Järna in southern Stockholm. There were other sightings of wolves in the region during the summer and autumn of last year.
Between 2009 and 2013, wolves marked a territory north of Stockholm, between Norrtälje and Åkersberga. But these animals are understood to have left the area.
Officials at the board have advised people to contact them if they spot any wolves or other predators in their local neighbourhood.
Wolves are social animals that usually move and hunt in packs. There are believed to be around 370 wolves in Sweden, with most of them living in the far north of the country.