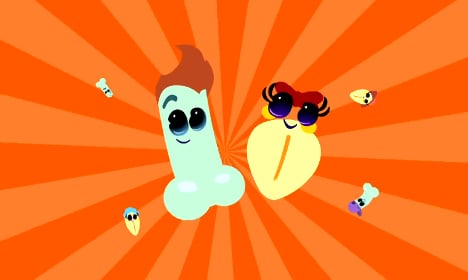 Photo: SVT
In the video (below), a cartoon penis and vagina dance around to a light and catchy melody. A man's voice sings over the top.
The lyrics (which sound much, much better in Swedish) include lines such as "Here comes the penis at full pace", and "the vagina is cool, you better believe it, even on an old lady. It just sits there so elegantly".
While the lyrics are discussing the old lady, a smiling cartoon vagina with a walking stick and glasses dances to the tune.
The song uses the children-friendly words for the genitals – snipp and snopp.
The clip, which is part of the TV show Bacillakuten on Swedish public service broadcasters SVT, has divided audiences in Sweden.
On Facebook, the video has amassed over 500,000 views and thousands of comments.
Some of the comments have been so crude that SVT was forced to step in and point out that the Facebook page has many young fans, warning users to watch their language.
"How a clip like this got the green light is the most bizarre thing of the year – and the year is only eight days old," one person wrote, sharing the meme which says "I don't want to live on this planet anymore".
Other commentors have been more positive.
"What a great song about the most natural thing there is. I think it was my daughter, however, who was bopping along the most," wrote one.
The programme will air on Sunday at 6:25pm, and aims to help children understand the human body and everyday diseases.