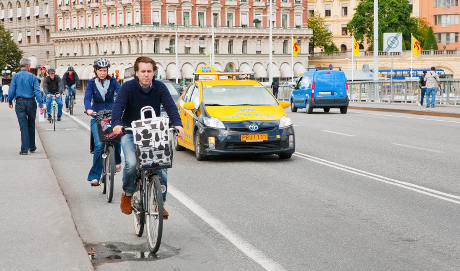 "It's possible to avoid around 40 premature deaths a year simply from the reduction in the level of pollution to which the Stockholm population is exposed,"  Peter Schantz, professor at the Swedish School of Sports and Health Sciences, told Svenska Dagbladet on Friday.

"Then you can save the same number of lives again, at the most conservative estimate, through the increase in physical activity. These are big numbers."

According to the interim report from the study, if an additional 110,000 Stockholm residents chose to bike to work, it would cut air pollution by twice as much as either the planned Stockholm bypass or a mooted congestion charge.

Schantz's team settled on the 100,000 number after estimating how many people in Stockholm live less than a half an hour cycle-ride from where they work.

"This is the group that is close to work and have the opportunity to cycle but still take the car. There are those who drive unnecessarily," Schantz said.

If this group opted to cycle, the percentage of cycle commuters in Stockholm would grow to 21 percent, still a long way behind the 35 percent share of commuting cycling has in Amsterdam and Copenhagen.

The study, which was funded by the Swedish Research Council for Health, Working Life and Welfare, was presented at the Linköping Transport Forum on Friday. It was carried out by researchers at Stockholm University, Umeå University, the Swedish School of Sports and Health Sciences, and the research group WPS.