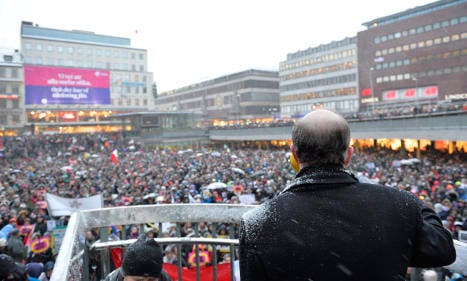 Braving sleet, snow and below freezing temperatures, Swedes joined Stockholm's French community and other international expats in Sergels torg, one of the city's historic squares, which has hosted numerous demonstrations in recent decades.

The Demonstration for Freedom of Expression and the Press was arranged by campaign group Reporters without Borders and the Association of Swedish Illustrators.

Many demonstrators brought along pens and pencils and held them in the air as they remembered the Charlie Hebdo cartoonists who died in Paris on Wednesday. French, Swedish, Spanish, Brazilian, Iranian and Turkish flags were spotted in the crowd.

Jonathan Lundqvist, Chairman of Reporters without Borders, said he was "really happy" with the turnout, which far exceeded what either he, or the police had been anticipating, despite four thousand people joining a Facebook group for the rally.

"Even though the weather was quite terrible, the Swedish public showed enormous support for freedom of speech by showing up. According to the police, it's some kind of record for this time of year. Usually they only see that kind of attendance in the summer."

Starting at 1.30pm, there was first a quiet memorial for the 17 people killed in the Charlie Hebdo attack and its aftermath. French people living in Stockholm were invited to gather around a large French flag, while others lit candles.

It's -2C, snowing, and the wind is blowing. But Stockholm is here. #FreedomOfSpeech. #JeSuisCharlie #CharlieSthlm pic.twitter.com/W9TtJVIpwz

A series of speeches took place from 2pm, with Thomas Mattsson, editor of Sweden's Expressen tabloid, one of the first on the podium.

"Freedom of speech is truly a must," he told the crowd. "We stand here not only in mourning, but in defiance."

His words were followed by Jacques Lapouge, France's Ambassador to Sweden, who spoke in English to thank Sweden for offering support to his home country.

"It is in these moments that you learn what friendship is," he said.

The rally ended with a speech from Martin Schibbye, the Swedish journalist who spent 438 days in prison in Ethiopia in 2011 and 2012. Stockholmers at the rally on Sunday. Photo: The Local

Among those in the crowd were Swedish-French couple Karin and Felix La Fleurey and their daughter Iris who is nine.

‘“It has been a tough week being abroad and seeing how my home country has been suffering and I have felt a bit useless,” Felix told The Local.

“We thought that France was a peaceful country and now we have to be extremely careful in the future – to make sure that religion brings love and not divisions. We are Christians but we support our Jewish friends and our Muslim ones”.

"Freedom of speech isn't something we should just take, it is something we have to give as well, as one of the speakers here said," added his Swedish wife Karin.

"It is very important to teach our children that we should all be united. We have been talking about this with our Iris."

"Yes, and I really don't like it," added the nine-year-old. The La Fleurey family at the rally. Photo: The Local

Berenice Mertens, 23, who is a French nanny working in Stockholm, told The Local that the attacks in Paris had taken place on her birthday.

"It was a total shock, just a horrible, horrible day. Now I am here at this rally," she said, holding up a pen.

The most high profile politician spotted in the crowd was Sweden's Minister for Culture and Democracy, Alice Bah Kuhnke.

Ahead of the rally there was some criticism from members of the French community in Sweden who said they felt that the rally was set to become too political.

‘The organisers should not feel proud. It was not the event that the moment needed or asked for…The relevance of the big media was zero…Why would Charlie Hebdo even exist if major media the world over did its job for real?”, wrote one critic John Manoochehri on Facebook.

“The event and its speakers reveal Sweden's own discomfort and inability to deal with the issues Charlie Hebdo is confronting. Speeches and fundraising for [Reporters without Borders] at a memorial? No organised Charlie banners, promotion, fundraising by the organisers? Shameful,” he added.

The decision to schedule thirty minutes without speeches at the start of the rally followed the criticism.

“French people had a need for mourning that was not clearly understood by Reporters Without Borders, and we were surprised by their super-agenda,” wrote one of the administrators for the event’s Facebook page.

“We can blame the lack of time and coordination,” she added.

French Stockholmers previously gathered outside the French embassy on Wednesday night, hours after the terror attack in Paris.

Sunday's protest passed peacefully, despite some concerns that it could be hijacked by far-right anti-Islamic protestors. While Reporters without Borders said ahead of the rally that it hoped that ordinary Muslims would feel welcome at the rally, there were few visible banners from Islamic groups in the square.

Wahid Abar, who is originally from Iran told The Local: "My parents were Muslims but we were secular and now I don't consider myself a Muslim. I am against Islam as a political ideology – following Sharia law or discriminating against different people because of their religion. They are a kind of fascist…like the Nazis."

"It's very good to see so many people here. Many people in Sweden support peace and they have come together to show solidarity for freedom of speech and other freedoms," he said.