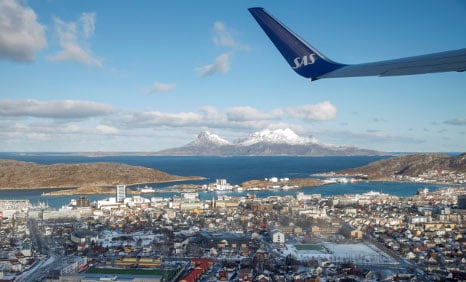 SAS is one of Scandinavia's biggest airlines. Photo: TT
The company said on Monday that 1.9 million people had taken an SAS flight during the last month of the year, up 7.1 percent on December 2013.
SAS added that more people were choosing to reserve seats in advance.
"We had an eventful 2014, with more passengers on board and also a higher proportion of seats being booked across nine consecutive months," said SAS CEO Richard Gustafson in a press release.
But the figures showed that fewer people were choosing SAS for intercontinental flights, with passenger numbers down 3.8 percent on 2013.
SAS has come under increasing pressure in recent years from low-cost rivals including Ryanair and Oslo-based Norwegian, Europe's third-largest budget airline, and reported a sharp fall in net profits last year.
"We have had a great growth internationally in the other months in 2014 so it is not a trend that fewer people are travelling with intercontinental routes," Henrik Edström, Media Officer for SAS told The Local.
However he accepted that there was "ongoing price pressure on the market" and said that the company was working hard to cut costs.
The company announced a "final call" recovery plan in November 2012 which included job cuts and salary reductions and further savings worth 2.1 billion kronor were revealed in December.
This summer, the company is launching nine new routes to popular package holiday destinations and European cities. For example passengers will be able to fly direct between Copenhagen and the cities of Edinburgh and Ankara; between Stockholm and Ankara, Budapest or Faro, between Oslo and Salzburg and between Gothenburg and Alanya, Dublin and Bergen.
The Stockholm-Gothenburg route is also getting a new morning departure on Mondays in both directions.
Flights from Stockholm to Hong Kong are scheduled to launch in February.
"We are in the process of upgrading our cabins and so passengers travelling to Hong Kong or Chicago or New York can expect a whole new flying experience in 2015," said Edström.
SAS is fifty percent owned by the Swedish, Danish and Norwegian states.