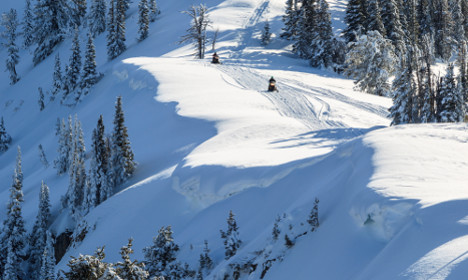 The pair were believed to be on a snowmobile like these ones. Photo: TT

The pair were picked up by a rescue helicopter soon after 11am after police and family members managed to contact the pair by phone.

They had been missing since Monday after going out on a snowmobile in a mountainous area near the village of Gördalen.

"They must have had a hell of a night. They had a windbreak up there but actually slept under a tree. They did not even have a fire," police spokeswoman Lena Nilsson told Swedish broadcaster SVT.

She added that neither of the pair had been injured.

After speaking to the father earlier in the morning,  police spokesman Bo Eriksson told news agency TT: "He sounded in reasonably good form…they are fine but we haven't yet found where they are."

The father contacted a relative at around 3.30pm on Monday to explain that they had run into trouble, but the pair had not been seen since.

Police spent the morning trying to call the father’s phone, but mobile reception in the region is known to be very patchy.

“It is very cold in the area now, around 16 degrees below zero. But these two should be accustomed to the mountain environment, they are not beginners,” Johan Wennström, duty police officer in Dalarna told the TT news agency just before 8am.

Extra rescue workers and volunteers were called in to help at around 5am on Tuesday morning and a helicopter was sent from Stockholm.

"That this ended well is wonderful. The feeling cannot be described with words. It is the kind that makes you shed a tear of joy," police spokesperson Lena Nilsson told SVT.