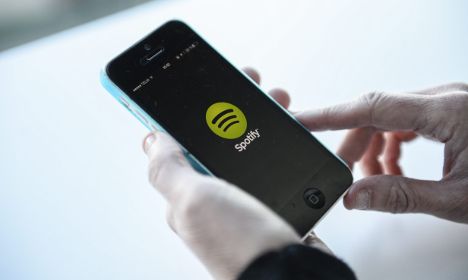 The Spotify mobile app. Photo: TT
The expanding startup said late on Monday that it had added 2.5 million subscribers since November.
Spotify has become a major power broker in the music industry since its US launch in 2011, drawing criticism from stars like singer Taylor Swift while propelling lesser-known artists into the spotlight.
The company's two-tier service allows users to stream an extensive catalogue for free with audio and display advertising, while those who subscribe pay around nine to 12 dollars a month for ad-free music streaming.
Mobile and smartphone users, however, have to pay to be able to choose tracks.
At the end of 2014, Spotify had 60 million "active users" of whom 15 million were paying subscribers, the company confirmed on Monday.
While the unlisted company does not disclose its finances, Spotify has said that it keeps 30 percent of its revenues, while 70 percent goes to artists and rights holders.
Abba's Björn defends Spotify
The company, which has entered markets in Europe, North and South America and Asia, has been criticised for not pay enough to artists.
In November US star Swift pulled her catalogue from the service, citing low compensation.
Spotify founder Daniel Ek responded that his company provides an alternative to listeners downloading music online for free.
"Piracy doesn't pay artists a penny — nothing, zilch, zero," Ek wrote on the company's website.
"Spotify has paid more than two billion dollars to labels, publishers and collecting societies for distribution to songwriters and recording artists," he added.
Abba's Björn Ulvaeus is among Spotify's high profile defenders.
Speaking to The Local last year he said: "There was no choice but to evolve. Before Spotify there was illegal downloading and that was taking all the revenue away from the record companies and the artists. Spotify is huge in Sweden. And yes, the writers don’t make as much money, but it’s better than making no money at all."
Radiohead frontman Thom Yorke has said Spotify is part of a "last gasp of the old industry," while stars ranging from ACDC to US country music giant Garth Brooks have snubbed the streaming provider.
There has been widespread speculation that the streaming provider is preparing to go public on the stock market even though the company has yet to turn an overall profit.
"They wouldn't be the first loss-making music service to go public," music startup consultant Bas Grasmayer told news agency AFP in an email, referring to US Internet radio service Pandora which went public in 2011.
With Google's YouTube Music Key on the market since November and Apple making no secret of its music plans, strong competitors are emerging for the Swedish startup.
"May last year might have been the perfect time (to go public), when they hit 10 million subscribers. They had the market largely to themselves," Mark Mulligan, a music industry analyst, told AFP.
"Spotify already have challenged economics, can they compete with Google and Apple? That's what potential investors will ask themselves."