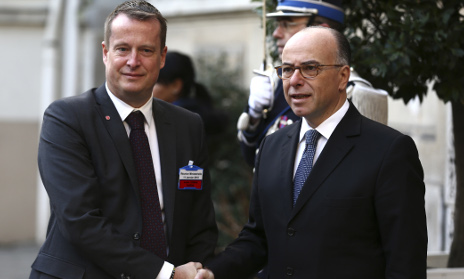 Sweden's Home Affairs Minister Anders Ygeman with his French counterpart Bernard Cazeneuve. Photo: TT
What has the world learnt in the week since the attacks in Paris?
The world has learnt more about the threat from terrorists.That they are murderers rather than warriors who attack unarmed journalists and the right to free speech. That we have to take the appropriate measures to combat terrorists in a way that does not affect freedom of speech?
What should those measures be?
On the EU level it is about collecting information about the journeys of terrorists and better cooperation between security services to help exchange information about specific events.
Do you think they are not currently sharing enough information?
We are working hard to exchange information, but there are still some obstacles. There is a discussion about trust and knowing if you can really rely on security services from other countries to use information in an appropriate manner.
How has Sweden been helping France since the attack?
Our security service offered to help, if there was any need for extra assistance, but I am not sure if France took us up on that offer. Myself and the Prime Minister went to Paris on Sunday to show our support and to be part of the great march as well as the EU-nine meeting of like-minded countries that took place there.
What was it like at the march on Sunday?
It was fantastic. I had a tear in my eyes because of this enormous manifestation of people showing that there will be no wall of silence.
The shootings in Paris followed a number of attacks on mosques in Sweden. How concerned should Muslims be that they could face further Islamophobia?
The main mosque attacks happened before Paris. But it is clear that there are dark forces now trying to link Charlie Hebdo to their own agenda and trying to raise tensions.
How worried should people be about a terror attack in Sweden? After attacks in neighbouring Norway and now Paris, many people are feeling worried.
We must not let the dark forces win. I can understand why people are concerned, but we are doing everything we can to prevent actions like these. We should not be afraid and we should not be silenced.
What is the government doing to help Sweden's Muslim community?
On February 2nd, the Minister for Culture and Democracy Alice Bah Kuhnke is meeting with Muslim groups and I hope to be there too. We have also had the police taking extra security measures and we have an ongoing dialogue between the police and other representatives to see what other measures can be taken. We have changed the criteria for getting funding for security, so hopefully some smaller mosques can also pay for their own protection. We are working with the Muslim community to encourage them to improve their own security and to report crimes against them.
Björn Söder, a Deputy Speaker in parliament from the nationalist Sweden Democrats suggested on Facebook after the Paris attacks that Islam may not be a "peaceful religion". What do think about someone from a major political party making those kind of comments in Sweden?
Well one of our leading Social Democrat politicians filed a police report against him. I don't think they [the Sweden Democrats] are a party that should be considered as being in the mainstream political arena. More and more they are showing themselves to be extremists. Blaming one religion for what one terrorist did is wrong.
Are the Sweden Democrats to blame for rising Islamophobia in Sweden?
No. Ideas are not said in a vacuum and we should consider every player in this debate. I won't blame any specific party but the climate of discussion they are operating in is clearly affecting the situation.
For the latest on the fallout from the Paris shootings, check out our sister site The Local France.