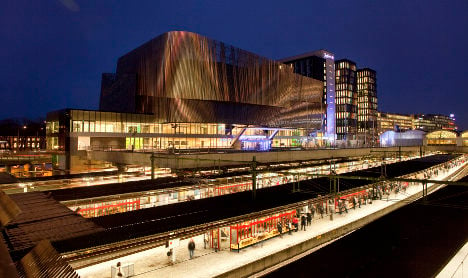 The Waterfront venue hosting Stockholm's Sonar festival in 2015. Photo: Sonar
For those who have never heard of Sonar, what is it?
Sonar is a festival for music, creativity and technology. We really focus on artists that use technology in different ways, for example making their own instruments or using technology as the key tool for what they do – not just on the sound and production of their music but also in the visualisation of their own shows. Sonar started in Barcelona but has organized more than 50 events in many different parts of the world.
Why did you decide to come to Stockholm for the first time last year and why are you coming back?
After we launched in Iceland's Reykjavik in 2013, we thought about hosting another event in the north, aligned on the same weekend [the same artists perform on different days over the weekend]. Stockholm made sense because it is the main capital for electronic music in northern Europe. It is a great scene and we have enjoyed having Swedish acts at our other festivals. Geographically, Stockholm is well placed to be a host city. Last year we had a great turnout of Swedish and international acts and we are coming back to bring people more. We are also launching the festival in Copenhagen for the first time in March, so this is all part of a new Scandinavian adventure for us.
The Local's top five winter festivals in Sweden Stockholm's 2014 Sonar festival. Photo: Sonar
What will be different in 2015?
The festival is a work in progress and we are planning that it will grow organically. I think technically and logistically it will be really interesting this year with our new Waterfront venue. We enjoy using unusual spaces or places with unique designs for our music and arts festivals. In Iceland we use Harpa for example which is a large glass concert hall. The new Stockholm venue is an iconic venue that is also flexible, so we can have two or three stages with music throughout the night.
Electro fans will recognise big international names like SBTRKT and Jamie XX on the bill. What are the key Swedish acts people should look out for?
Elliphant is on the line-up. She really connects Swedish art and electronic music and has worked with the likes of other leading names in the scene like Diplo and Skrillex. Roll the Dice is another strong act to look at. We had them perform in Barcelona last June. They did a lot of experimental music and covers.
It is quite expensive for a music festival, especially for visitors to Stockholm who also need to find a hotel room (a two day pass is 1,090 kronor or $135). What will people get for their money, apart from the music?
Well if people think that it is expensive then maybe this is something we should have in mind and discuss in future years. What we are trying to provide is a first class production – a quality event with high technical production. In terms of accommodation, people could not camp in February because it is too cold! But we feel we are making the most of this slot in the calendar when there is nothing else really happening in the north, so we are taking this window and also hoping that people living abroad will use it as an excuse to visit Stockholm and see everything else it has to offer like the food and design. I was in Reykjavik last year, so I haven't been to Sonar in Sweden myself yet. I can't wait to catch the vibe in Stockholm.
www.sonarstockholm.com